The Skoda Yeti is surprisingly car-like – even entertaining – to drive, yet the 4x4 models also make decent off-roaders

The Skoda Yeti is nothing if not a well designed, versatile and practical car with a keen eye on family friendliness. It’s a real bonus that the Yeti actually turns out to be good to drive as well.

The gearbox is smooth, the steering accurate and all the controls are placed sensibly and easy to use. Despite its rugged looks, the Yeti is just as at home in an urban environment as it is playing in the rough, never feeling more intimidating to drive than any other car. 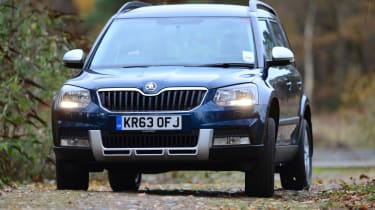 The turbocharged engines are efficient while easily matching the pace of fast motorway traffic and the raised suspension cushions you from poor road surfaces.

You can also confidently attack some pretty challenging terrain if you go for four-wheel drive with one of the more powerful petrol or diesel engines. It has been said that this 4x4 system is good enough to place the Yeti on an even playing field with established rivals like the Nissan X-Trail and even the Land Rover Discovery Sport. And all this without making it feel any worse on the road.

Even the smallest TSI petrol engine, the 108bhp 1.2-litre, gives plenty of power for most drivers and in fact this model has proven one of the best-sellers. When it’s really pushed hard it can get a bit noisy, but otherwise it's perfectly comfortable on the motorway. 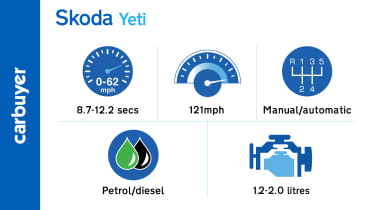 If you want to make the most of the Yeti’s practicality, regularly filling all five seats and the boot, we’d suggest either the 109 or 148bhp 2.0-litre diesels. Both are excellent and the best way to choose between them is to look at your budget – though the extra power of the 148bhp engine is certainly worth having when four-wheel drive is fitted, and makes the Yeti a very useful car for lugging caravans from muddy campsites or recovering a boat on a greasy slipway.

If you want an automatic gearbox you’ll have to choose between either the 1.2-litre TSI petrol or the most powerful of the two diesels. However, we really rate the manual gearbox and it's so smooth that we'd recommend it over the automatic. The automatic is very good, but it does rob the Yeti of some of its driving fun, as well as making it slightly less economical with the diesel engine.