Rated by its owners as the most satisfying car to own in the UK for three years running, the Skoda Yeti is also a top safety performer

SUVs and 4x4s are often bought as they’re perceived to be safer and more durable. The Skoda Yeti definitely fulfils both of those criteria, with proven components, high safety scores and an ever-growing list of very satisfied drivers bolstering its reputation for reliability.

All of the Yeti’s mechanicals – petrol and diesel engines, manual and DSG gearboxes and the four-wheel drive system – have been tried and tested on VW Group cars for many years, so major problems are few and far between.

As with any car, proper scheduled maintenance is the key to long-term reliability, and Skoda recommend a service every 12 months or 10,000 miles which can be covered by a service plan.

The Skoda Yeti was rated highly for reliability in our 2017 Driver Power owner satisfaction survey of cars currently on sale in the UK. However, of the owners who responded, 9.2% reported experiencing a problem with their car at least once. 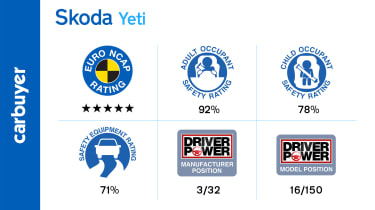 When it was crash-tested by Euro NCAP, the Yeti received a five-star rating for safety and the model comes complete with passenger, side and curtain airbags. It scored an impressive 92% for adult occupant protection and 78% for child occupant protection.

Pedestrian protection wasn’t as good, however, with a score of 46%. The testers commented: "The front edge of the bonnet performed poorly, scoring no points. Some parts of the bonnet offered good protection to the head of a pedestrian but most areas likely to be struck by an adult's head offered poor levels of protection."

The Yeti is well equipped, with airbags all round, ISOFIX child-seat anchor points in the back as well as all the active safety systems you'd expect, including electronic stability control and traction control, as well as anti-lock-brakes.