The engines Smart ForTwo is even cheaper to run than before thanks to its new, efficient engines. That makes it an ideal candidate for motoring around the UK's congested cities.

The more frugal 70bhp 1.0-litre engine can return fuel economy of up to 68.9mpg and has CO2 emissions of 93g/km. For around £600 extra, you can get behind the wheel of the more powerful 0.9-litre turbocharged model – the engine we recommend. It returns fuel economy of 67.3mpg and has CO2 emissions of 94g/km, so it's also cheap for company-car drivers, with a 15% Benefit-in-Kind (BiK) rating. 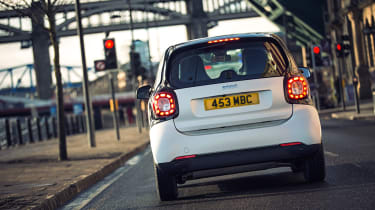 The Smart should be as easy on the wallet as all of its main petrol-powered rivals – including the 69mpg Volkswagen up! and the 66mpg Hyundai i10. The 0.9-litre Fiat Panda TwinAir matches the 67.3mpg economy of the more powerful Smart, but the Panda's claimed figures are notoriously difficult to achieve in real-world driving.

A five-speed gearbox is standard on the Smart, while DCT automatic transmission is a £995 option. The official average fuel economy figure for cars equipped with the automatic is just as good as the manual and it's a modern, hi-tech gearbox that we found very nice to use. It's further improved in the Brabus version, offering even faster gearchanges.

The basic version of the Smart ForTwo qualifies for group three insurance, so it'll be very cheap to cover. The insurance group for the more powerful model ranges from eight to nine, so cover shouldn't cost much more than for the entry-level model. The Smart ForTwo features plastic panels that are resilient to shopping-trolley shunts and also easy to replace – which keeps repair costs low and reduces the cost of insurance cover.

Smart's three-year warranty is pretty much par for the course these days - although it's a big improvement on the two-year cover provided before 2015. It covers the ForTwo for an unlimited number of miles, but as most buyers are unlikely to travel huge distances in it, this seems largely irrelevant. Spend your money on the Hyundai i10 and you get a far more generous five-year/100,000-mile warranty.

The Smart's maintenance costs should be very reasonable. Smart offers service plans called Service Care, which can cover two or three services over 12, 24 or 36 months.