As Smart is owned by luxury brand Mercedes, we'd expect the Smart ForTwo to perform well in forthcoming Driver Power surveys, although this hasn't always been true for the brand in the past. Smart will hope the new car can turn around its fortunes and it certainly feels better built than the old model.

Safety has never been an issue with the Smart ForTwo and it performs better than you'd ever expect of a model so small, though, achieving a four star Euro NCAP safety rating. Mercedes has conducted its own tests to prove the Smart ForTwo – with its tough 'Tridion' safety cell and rear-mounted engine – can safely protect its passengers from a head-on collision with the much larger Mercedes S-Class.

This Smart ForTwo was too new to feature in our Driver Power 2016 survey for specific models and the brand itself didn't appear in the manufacturer rankings, either. This makes it a little difficult to make definite pronouncements about the car's long-term reliability. The Renault Twingo did appear in 67th place, however, with an encouraging 47th for reliability. Considering how much technology they share, that’s a good sign. 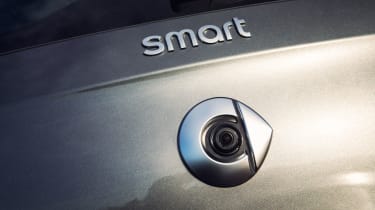 Despite its impressive in-house safety tests, the Smart could only achieve a four-star rating when it was evaluated by Euro NCAP – it lost a star due to the absence of an automatic braking system. That meant the car could only score 56% in Euro NCAP’s recently introduced safety assist category.

Meanwhile, it was 7% behind the Volkswagen up!'s 89% score for adult occupant protection, but matched it for child safety and was 10% better at protecting pedestrians. The 2014 test the Smart was subjected to is also much tougher than the 2011 test the up! faced, because Euro NCAP has made its procedures more stringent.

Safety features available on the Smart car include an optional forward collision warning system, which can sense an imminent impact and warn the driver to take emergency action, plus optional lane-keeping assistance and crosswind assistance (which helps prevent the car being buffeted by strong gusts of wind).