Much better to drive than the old car, but the Smart ForTwo still isn’t ideally suited to long motorway drives

As it's owned by Mercedes, Smart has access to some of the technology that's available on that company's much larger (and more expensive) saloon cars. The Smart ForTwo shares certain rear suspension elements with the new Mercedes C-Class and feels more comfortable as a result. Poorly surfaced roads don't cause the jiggly ride that they did in the old car and the Smart always feels cushioned and compliant.

Enthusiastic drivers may get excited by the fact that the Smart ForTwo has its engine in the back – the same place as a Porsche 911. However, while the Porsche has it there to increase grip, traction and fun, the Smart has it behind the driver to make the best use of space, helping the car to be safer and offer more accommodation.

The car has grown wider than the old model and feels more stable in corners, but Smart makes it clear that the ForTwo was set up with safety, not overt sportiness, in mind. That's immediately evident when you venture out of the city, where a relative lack of front-end grip in fast corners and overly light steering let it down.

With no engine in the front to restrict movement of the front wheels, the Smart boasts a turning circle of 6.95 metres – better than any other car on sale. It'll even outmanoeuvre the famously tight-turning London taxi. 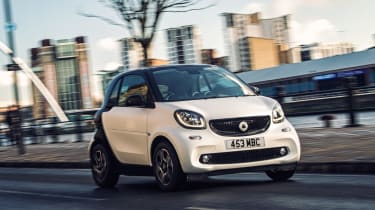 As most Smarts will probably spend the majority of their lives in town, performance is nippy, but not startling. The basic 1.0-litre 70bhp model can get from 0-62mph in 14.4 seconds – that's enough to keep pace with city traffic, but don't expect much in the way of acceleration at motorway speeds.

If you’re likely to make any longer journeys you‘ll find the more powerful 89bhp 0.9-litre turbocharged engine far better suited. It can get the car from 0-62mph in 10.4 seconds and is a lot more comfortable at higher speeds, with overtaking less of an effort. It's our pick of the range, but it suffers from a narrow power band, which means you need to change gear quite frequently to get the best of the engine's performance.

German tuning company Brabus has also got its hands on the ForTwo, resulting in a performance version. It has the 0.9-litre turbo engine, with power boosted to 108bhp and more urgent acceleration from low speed. This model will do 0-62mph in 9.5 seconds and top out at 103mph, while it also has steering and suspension tweaks for a sportier, more responsive drive.

The old automated manual gearbox – with its slow and clumsy changes – has now thankfully been ditched. In its place is either a five-speed manual or the optional (£995) dual-clutch six-speed automatic. The manual is easy to operate, while the new twin-clutch auto is light years ahead of the old automated manual – shifts are much quicker and there's no hint of the old model's jerky progress. Nevertheless, the DSG twin-clutch gearbox fitted to the Audi A1 is better still.