“If you’re a member of the small audience the Smart EQ is aimed at, you’ll find it an appealing and competent car” 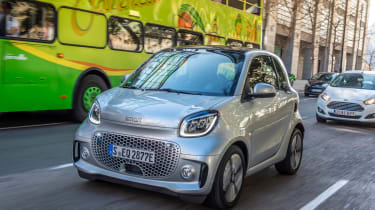 While electric cars are getting bigger and more luxurious, the Smart EQ ForTwo reminds us why they first started appearing as smaller models: it’s agile, brisk and great to drive around town. A makeover for 2020 saw the EQ ForTwo fitted with a new front bumper and grille in body colour, along with new exterior lighting and some tweaks inside.

The EQ ForTwo has a range of 100 up to 83 miles, takes around three-and-a-quarter hours to charge using a 7kW wallbox and goes from 0-62mph in 11.6 seconds. It feels a little out of its depth on motorways and dual-carriageways but, as an urban companion, it’s perfect – assuming you’ve got somewhere to park it and charge it up. In town it feels far nippier than its 0-62mph-time suggests, with instant zip allowing it to dash into gaps and away from lights. 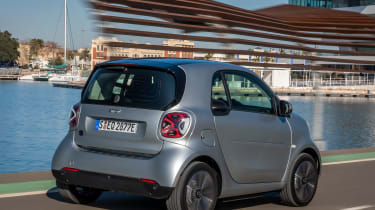 The EQ ForTwo competes with other small battery-powered cars like the Volkswagen e-up!, Skoda Citigo e iV, SEAT Mii electric and supermini-sized Renault Zoe. The update to the VW Group's trio of electric city cars has boosted their range to double that of the Smart, making them stiff competition. Similarly, the fact the EQ ForTwo can only seat two definitely counts against it, but there's no denying its charm as a second car solely for use around town.

It's joined in the Smart range by an electric EQ ForTwo Cabriolet, as well as an EQ version of the larger, four-seat Smart ForFour.

Like most electric cars, the Smart EQ ForTwo is very easy on the wallet

Once you’ve spent £16,000 or so (after a £3,500 government grant) for your EQ ForTwo, running costs are very low indeed. Road tax is free for electric cars with zero emissions, while the EQ ForTwo qualifies for the lowest Benefit-in-Kind rating, making it particularly attractive for business buyers. It’s exempt from the London Congestion Charge, along with other low-emissions zones cropping up in cities across the UK and Europe. 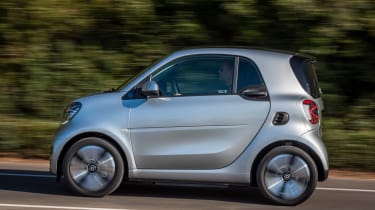 You’ll have to pay for the electricity its batteries use, but expect a full recharge to set you back a few pounds, which isn’t bad for 83 miles worth of travel for two people.

The biggest issue is practicality, not to do with size or range: as a town car, the EQ ForTwo works best if you’re able to charge it up at home. That’s not a problem if you’ve a driveway or an allocated parking space in your block of flats (complete with a power socket), but more problematic if you park on the street, as trailing a cable across the pavement is a bad idea.

Topping up the Smart's battery pack from 10 to 80% can take as little as 40 minutes using a 22kW fast-charger, extending to just over three hours if you use a conventional 7kW wallbox. Plug the EQ ForTwo into a domestic socket and the same charge will take up to six hours.

The Smart EQ ForTwo is at its best around town

Because electric cars don’t use a conventional gearbox, putting your foot down in the Smart EQ ForTwo causes its power to arrive instantly in a smooth wave. With a 0-62mph time of 11.6 seconds, it may not sound quick, but up to 40mph acceleration is pleasingly brisk, making nipping in and out of city traffic a doddle. Its 6.95-metre turning circle is also a big advantage, beating even a London taxi and making it possible to U-turn in almost any street. The suspension is also impressive, as it absorbs pitted tarmac and potholes well. 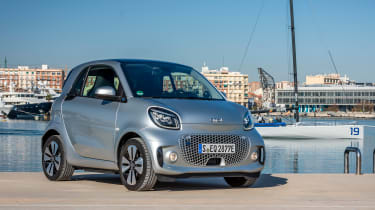 The news is a little less encouraging outside of town, where wind and road noise make more of an impact than we’d like – but that’s partly because the ForTwo’s motor is almost silent, so everything else sounds loud in comparison. With a top speed of 80mph, the ForTwo is certainly capable of venturing out into the wider world, but its acceleration is less impressive past 40mph and high-speed journeys are by no means a relaxing experience. The EQ ForTwo isn’t really designed for long motorway slogs, so these shortcomings can be reasonably overlooked.

Step inside the Smart EQ ForTwo and you’re greeted with a pleasingly distinctive dashboard. There’s a natty pod-like dial perched above the steering wheel displaying the battery status, and the 2020 facelift brings a new centre console with an extra pair of cupholders and a tray for smartphones. The infotainment screen is a throwback to Smart's past ties with Renault, however, and feels dated. For now it offers Android Auto but no Apple CarPlay; a larger display with full smartphone connectivity is promised later in the year. A further colour screen rests inside the speedometer, providing supplementary information about how efficiently you’re making use of the power pack. 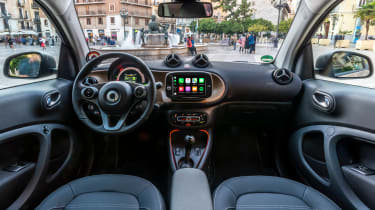 Interior quality is generally strong and even if a few scratchy plastics have found their way inside, that’s understandable at this price point. Every EQ ForTwo is fitted with LED running lights, programmable climate control (so the car is at the desired temperature when you get in) and a smartphone app enabling you to monitor the car’s charging and battery status remotely. Passion Advanced trim adds 15-inch alloy wheels and black upholstery with white stitching, while Pulse Premium upgrades the ForTwo with 16-inch wheels, a panoramic roof, sports pedals and a rear-view camera.

If you really want to make a statement, Prime Exclusive adds eight-spoke 16-inch alloy wheels, full-LED headlights, ambient lighting and heated seats, along with extended fabric and leather accents around the interior. A limited Edition One is also offered at launch, which has a Brabus styling kit and wheels.

As long as you’re happy only having two seats, the Smart EQ ForTwo is pretty practical

As a two-seater city car, the Smart EQ ForTwo is hardly going to be the first choice for big families, but it’s reasonably useable. Visibility is good thanks to the high driving position and this combines with wide-opening doors to make access excellent. 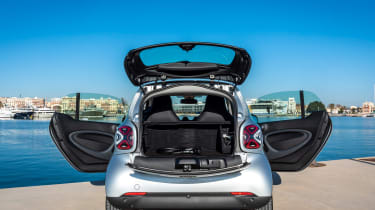 Boot space is decent for a car of this size, with 260-340 litres on offer depending on whether you load to the roof or the parcel shelf. In comparison the Volkswagen e-up! has a 251-litre boot.

Despite being part-owned by Mercedes, Smart is a bit of a niche manufacturer and neither it nor its cars feature in our Driver Power customer satisfaction survey in 2019. Those Mercedes roots should add reassurance, though, and everything inside the EQ ForTwo feels robust and thoroughly engineered – the odd bit of scratchy plastic aside. 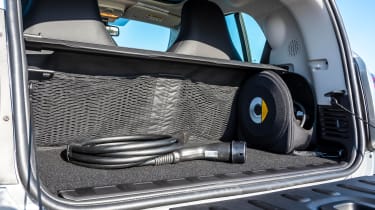 As the EQ is structurally identical to the now discontinued petrol ForTwo, that car’s four-star (out of five) safety rating from Euro NCAP also applies here. Euro NCAP’s tests have been toughened up in the past few years, so quite a few cars are now getting four stars; 82% adult and 80% child occupant ratings mean you can rest easy in the EQ ForTwo, however. 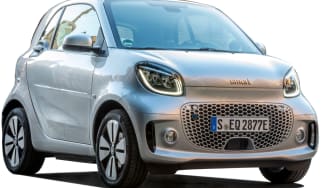 Looking for a compact, zero-emissions car? These are the best small electric cars on sale
Renault Twingo axed from UK range