By taking an innovative approach to the hybrid setup, the Suzuki Ignis keeps economy up and costs down

Small, light cars tend to be fairly cheap to run and, at just under 900kg, the Ignis is certainly light. That translates into decent economy whichever model you choose, meaning the lack of a diesel engine is no hardship.

The Suzuki Ignis officially returns 54.1mpg at best and 48.6mpg at worst, meaning it’s slightly behind the Skoda Citigo in terms of outright economy. Considering the Ignis offers more space inside, a better view out and is a much taller car than the Citigo, though, that’s understandable.

Choose the cheapest front-wheel-drive Ignis with the standard 1.2-litre petrol engine and you’ll be getting a car that manages up to 52.9mpg. 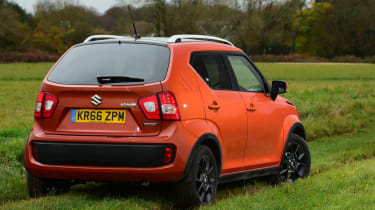 The 1.2-litre SHVS ‘mild hybrid’ does slightly better; it returns up to 54.1mpg without four-wheel drive and 48.6mpg with. Despite being slightly more economical than the normal engine, the SHVS setup also improves performance by a small yet noticeable margin. For this reason, we think Suzuki is justified in calling it a ‘smart’ hybrid vehicle.

CO2 emissions range from 98-109g/km, with the front-wheel-drive SHVS Ignis emitting the least. That’ll translate to one of the lowest Benefit-in-Kind (BiK) rates for company-car drivers. In terms of road tax, the Ignis costs £145.

When fitted with the Dualjet engine, the Ignis sits in insurance groups 15-17, while the hybrid is in groups 17-18. These are surprisingly high for a small car, with a model like the Skoda Citigo starting from group two and an equivalent Renault Captur crossover in group nine.

Cars of the Ignis’ stature tend to be relatively inexpensive to maintain and Suzuki’s servicing packages will make budgeting easy. The SHVS model may be a little more expensive than the standard car come service time, though.

The Ignis comes with Suzuki’s standard three-year/60,000-mile warranty, which is average for the industry, matching the Skoda Citigo. However, it falls short against the five-year warranties offered by Toyota and Hyundai as well as Kia's even longer seven-year package.