If you take your own car or hire a car in Spain, you’ll need to understand Spanish driving laws 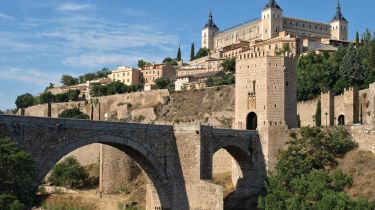 A combination of its sunny climate, expansive beaches and rugged, mountainous scenery all bring in tourists to Spain and its islands, not to mention the many restaurants, historical landmarks and cultural attractions, including the vibrant nightlife.

Almost 18 million Brits – a figure equivalent to nearly a quarter of the UK’s entire population – were drawn to Spain in 2016. The Iberian country is a must-visit destination for many over here, and that’s reflected in a statistic showing the UK provides the highest number of tourists – at least seven million more than France or any other nation.

Driving in Europe after Brexit: everything you need to know

Out of the millions of people crossing the border, hundreds of thousands will look to hire a car or catch a ferry from the UK. The warmer climate reminds us how different it is from Britain, and it’s best to remember that the road systems are different and maybe not what we’re used to.

Spain drives on the right-hand side of the road. Make sure you’re actively conscious of this while driving, especially at roundabouts where you’ll need to look for oncoming traffic from your left. Make sure you don’t become part of the trend of close calls and near misses when leaving the airport or driving off the ferry.

The minimum legal driving age in Spain is 18, but you’ll have to be 21 or over if you want to hire a car. If you’re under 25 and looking to hire a vehicle, be aware that you can be subject to an additional young driver fee, so it’s important to check with the car-hire company before you travel.

Showing a full UK licence photocard is an essential requirement for Brits looking to hire a car. If you’re taking your own car, check what cover your insurance company provides. Some will offer only third-party protection abroad as standard, so if this is the case, it’s a wise idea to bump up the policy to a fully comprehensive one.

What do you need to have in your car?

The law is more stringent in Spain than in the UK about items you’re required to have in the car on every journey. Each occupant must have access to a high-visibility vest in case of breakdown, while a hazard-warning triangle is another piece of mandatory kit. Foreign cars only need to carry one of these, but local vehicles must have two, so check there’s a pair if you’re hiring a car.

Speaking of hire cars, if you’re planning on visiting Gibraltar, check that the hire company allows you to do this, as driving on ‘The Rock’ is excluded by many rental agreements. Although it’s a British Overseas Territory, Gibraltar follows Spanish convention, so you’ll be driving on the right.

If you’re driving a right-hand-drive car, you’ll need to fit headlight deflectors to avoid dazzling other drivers. If your car has headlights that can be adjusted for driving on the right, make sure you know how to do this. You also need to take your UK photocard driving licence, as well as proof of insurance and ownership of your vehicle, so pack your V5 logbook, or at least make a photocopy and bring that. Also, if you require glasses to drive, it is now mandatory to carry a spare pair in the car with you at all times, so ensure you have an additional pair handy.

Additionally, if the UK exits the EU in a no deal Brexit, you may be required to carry an International Driving Permit (IDP) and a motor insurance green card with you at all times.

• Driving in Europe after Brexit: Everything you need to know

If you plan to hire a car, you’ll need to use the DVLA’s online ‘share driving licence’ service to generate a unique code allowing the hire company to see your licence details. This code is valid for 21 days.

It’s a sensible idea to carry your passport with you, as further proof of identification. If your car isn’t fitted with number plates that have a blue strip and EU logo on the left-hand side, you’ll also need to attach a GB sticker to the rear of the car.

In a word, strict. While Spanish speed limits are roughly similar to UK ones, they’re enforced with far more rigour. Spanish police mount frequent speed traps and you can be fined for being just 1kph over the limit. Speed-camera radar detectors and jammers are also banned in Spain, but a sat-nav showing speed camera locations is still permitted.

Spanish speed limits are as follows (except where signs indicate a lower limit):

Note that some Spanish towns have reduced their speed limit to 30kph (18mph) or even 20kph (12mph) – so keep an eye out for warning signs.

The drink-driving limit is also lower in Spain than at home, with a maximum Blood Alcohol Concentration (BAC) of 0.5, compared to England and Wales’ limit of 0.8. While it’s always a good idea to avoid drinking at all if you’re likely to be driving, this is even more the case if you’ve been driving for under three years: novice drivers in Spain are only permitted a BAC of 0.1, meaning even one small sangria is likely to put you over the limit.

As in the UK, the use of mobile phones is banned when driving. While you can use a hands-free system, you are not allowed to wear headphones of any kind.

The use of the horn is prohibited in many urban areas, so Spanish drivers often flash their headlights instead. If someone flashes you, this can mean they’re asserting their priority rather than giving you right-of-way. Make sure you remember to give way to drivers on the left at roundabouts.

If you’re breaking the speed limit or committing some other driving infraction, you don’t need to be pulled over: if a police officer witnesses a driving offence, their statement and your number plate is sufficient evidence for a fine to be issued. The collaborative nature of EU countries means it’s a simple process for the authorities to post a fine to your home address back in the UK.

If you’re pulled over, be prepared for an on-the-spot fine. Foreign drivers must pay fines immediately, and there may be a reduction of 50% if a fine is paid within 20 days. If you’re not able to pay immediately (either with cash from your wallet, or after being escorted to an ATM) your car can be seized.

The Spanish government has built a large number of motorways in recent years. These are called ‘autopistas’ and are prefixed ‘AP’. Beware that some maps and sat navs may not have been updated to show recently built roads. The autopistas are frequently empty, but that’s because they’re mostly tolled. The toll fees are similar to those in France and Italy, with routes such as the 136km coastal route from Malaga to Gibraltar costing around €10.

If you’re likely to do a lot of motorway driving, it could be worth getting a pre-paid electronic payment device (called a ‘Telepeaje’) from a bank or petrol station, as this avoids having to pay at a kiosk.

Spanish drivers aren’t known for their generosity towards others pulling onto motorways, so be prepared for this. One final thing to be aware of when driving on autopistas is that the Spanish police strictly enforce the use of indicators when joining the motorway and changing lanes. Fail to indicate and you could be liable for a fine.

If you’d rather not pay for the autopista, Spanish dual-carriageways are called autovias (prefixed with an ‘E’) and are free – although they can be much busier than the motorways. If you miss an exit on the dual-carriageway, keep an eye out for signs saying ‘cambio de sentido’ – these indicate that there’s an upcoming overpass or underpass that’ll allow you to change direction.

As mentioned above, the speed limit in towns can vary depending on the local authority. In terms of parking, there are blue on-street parking zones called ‘zona azul’ or ‘zona O.R.A.’ and these usually need to be paid for at a meter, with stays limited to two hours. It’s often cheaper (and easier) to find a public underground car park. If you do park on the street and the area is poorly lit, you must leave your sidelights or parking lights on.

As with the UK, pedestrian crossings are indicated by black-and-white stripes on the road and unless there are traffic lights, pedestrians have right-of-way. Be careful using your horn, too: in many built-up areas sounding your horn is illegal (signs will indicate this) and you can be fined for using it excessively outside of towns, too.

What to do in an accident or breakdown

In the event of an accident, try to move the vehicle to the hard shoulder or a lay-by unless it’s unsafe to do so. Place one warning triangle 50 metres in front of the car and another 50 metres behind to warn other road users of your stationary car and alert the emergency services by calling 112. It’s also worth noting that if you are involved in or witness an accident, you are obliged to tend to victims.

In a breakdown, only proper towing vehicles are allowed to move a stricken vehicle. Towing by another car is only permitted to move it to the nearest safe place, and never on a motorway or dual carriageway. SOS telephones are present along the roadside on motorways and the documentation for hire cars should include information on breakdown recovery services.

If the UK leaves the EU without a deal later this year and no alternative arrangements come into effect, you will no longer be able to request help from the Motor Insurers’ Bureau (MIB) should you be involved in an accident in Spain and need to pursue a claim against the third party where you’re insurer refuses to help. This will leave you to personally pursue any claim, including all discussions with the relevant Spanish insurance company.

Also, the MIB will no longer compensate British motorists who are involved in an accident with uninsured drivers in Spain post-Brexit. They will only deal with accidents that occur in the UK.

If you’re travelling with children, they must be in child seats if they’re under 12 years old or 135cm in height. Note that they must also travel in the back of the car, unless a dedicated child-restraint system has been fitted to the front passenger seat.

Petrol stations are plentiful in towns and around the autopistas, but many smaller ones close for several hours at lunchtime and all day on Sundays, so don’t let your tank get too low, particularly as in rural areas it can be some time before you’ll see another station. Unleaded is called ‘sin plomo’ and diesel is ‘gasoleo’.

Spanish road signs can also be somewhat sparse outside of towns, so make sure you know where you’re going before you set off.

Finally, if you’re towing a caravan and the total length of your vehicle and caravan is more than 12 metres, you must display one long reflector (130cmx25cm) or two short reflectors (50cmx25cm) at the back.

Driving in Spain is not that different from driving anywhere else in Europe, so as long as you know what you’re doing and where you’re going, it should be a pleasure. Being aware of the subtle differences in driving conventions and laws should help any journey you take be that much smoother. Buen viaje!

Want to know more about driving in Europe? Read our full guides to driving abroad and hiring a car.