What does fuel consumption mean? 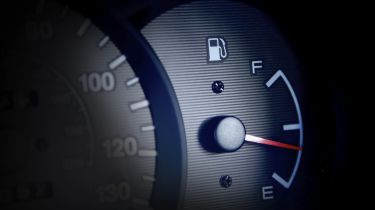 The amount of fuel a car uses has a huge bearing on its running costs, so many buyers pay close attention to this factor. However, it’s not always clear how manufacturers’ fuel economy figures are arrived at.

Does this matter to you? The answer to that is, increasingly, yes – particularly when so many cars claim extremely high fuel-economy figures, particularly hybrids and plug-in hybrids. Sometimes, the headline fuel-economy figure doesn’t quite tell the whole story, meaning the car may not save you as much money in the long run as you’d hoped.

It gets complicated when you learn that ‘combined’ fuel consumption – the fuel-economy figure used by most magazines and online publications, including Carbuyer, is a ‘calculated’ figure rather than one based on real-world driving. All current mandatory tests take place in laboratory conditions – carmakers have no legal obligation to provide any other economy figures.

By explaining how they’re calculated, this guide aims to put manufacturers’ fuel-economy figures in context. We’ll then pit a diesel and a plug-in hybrid against each other to see how the different power systems fare in official tests – and how the headline figures really compare.

This should help you to choose a car that’ll suit your needs, whether it be petrol, diesel, hybrid, plug-in hybrid or electric. 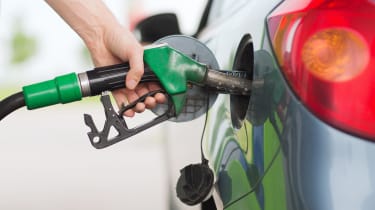 Every car manufacturer is obliged to provide fuel-consumption figures for its cars. In order to standardise how figures are obtained – ensuring that claims can be meaningfully compared between different cars – every carmaker selling cars in Europe follows the same measurement system.

For many years, car manufactures provided figures for driving at a constant 56 and 75mph, and another for urban fuel consumption. However, during the 1980s it was determined that a more representative system was required. Today’s system, the New European Driving Cycle (NEDC), has been around in its current form since 1997 and has been adopted as the official test system across Europe and in other places besides – although many nations have their own systems.

It’s used to test every kind of car you can buy, whether petrol, diesel, hybrid or electric, calculating fuel consumption and exhaust emissions, or battery range in the case of pure electric cars.

The NEDC fuel-economy test takes 19 minutes 40 seconds to perform and is broken down into three parts – each of which provides an official fuel-consumption figure.

In our description of the tests, all times are given in seconds and speeds are in kilometres per hour (kph). The test description is for a manual car – automatics follow the same procedure, but any references to the clutch can be ignored.

This first part of the test takes 195s, covers a theoretical distance of slightly more than 994 metres and is repeated four times without pause. It’s intended to recreate city driving, with frequent stops to simulate traffic lights. The test procedure is as follows:

The car then accelerates in first gear for 5s, then after a 2s changes gear, spending 5s in second gear until 32kph is reached. It then cruises at this speed for 24s before gradually braking to a full stop in 11 seconds (clutch disengaged for the last 5s). It idles at a standstill for 21 seconds, the last 5s of which the car is in first gear with the clutch disengaged.

The car then accelerates to 50kph over 26s, stays in first gear for 5s, performs a 2s gearchange and then spends 9s in second gear. After another 2s gearchange, it spends 8s in third gear. It then cruises at 50kph for 12s before decelerating over 8s to 35kph. It cruises at this speed for 13s before braking to a standstill over 12s; there’s then a final 7s pause in neutral.

After four repeats, a total of distance of 3,976 metres is covered at an average speed of 18.4kph.

The second part of the test occurs immediately after the urban cycle. It covers a theoretical distance of 6,956 metres. The test procedure is as follows:

The test car idles for 20s before slowly accelerating over 41s, spending 5s in first, 9s in second, 8s in third and 13s in fourth gear (allowing 2s for each gearchange) to reach 70kph. It then cruises at this speed for 50s in fifth gear and then decelerates over 8s to 50kph, changing down to fourth gear after 4s.

The car then cruises at 50kph for 69s, before accelerating over 30s to 100kph. It cruises at this speed for 30s, in fifth or sixth gear. It then accelerates for 20s to reach 120kph, cruising at this speed for 10s, and then gradually brakes to a full stop over 34s. Once at a standstill, with the clutch disengaged and the car in neutral, the car idles for 20s. The NEDC test cycle is then complete.

The average speed of the extra-urban cycle is 62.6kph.

The ‘combined cycle’ figure is a calculation based on an average of the above two figures. It measures the total fuel used over the theoretical test distance of 11,023 metres, at an overall average speed of 33.6kph. 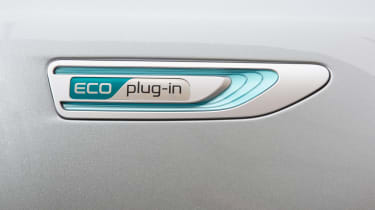 If you compare the results of a plug-in hybrid car’s fuel-consumption test side by side with that of a diesel car, the difference is stark. For our example, we’ll use a car that’s available with both diesel and plug-in hybrid engines – the Kia Optima. We’ll use figures where both versions have 17-inch wheels fitted.

In the ‘urban cycle’ column above, you’ll notice that the fuel consumption for the plug-in hybrid is zero. This is because the operating parameters of the Kia Optima PHEV allow it to run entirely on electric mode throughout the NEDC urban test cycle, with no fuel being used at all. The diesel model manages 55.4mpg, a figure that’ll be helped by the engine stop-start feature switching the engine off on parts of the test where the engine would be idling. This is permissible within the rules of the NEDC test.

Column two shows the ‘extra-urban’ or out-of-town cycle, where higher speeds are reached. You’ll notice that the diesel car actually performs better here. This is very significant for those drivers who spend little time in urban areas, where a plug-in hybrid is in its element. At higher speeds, where the plug-in hybrid uses its petrol engine and not the electric motor, the Optima PHEV uses more fuel than the diesel.

The ‘combined’ figure in the third column, an average of the first two figures weighted against the total distance covered, is the most significant of all. It’s the figure used by the majority of car magazines and websites, including Carbuyer, to provide an overall impression of fuel economy. However, as the table shows, it doesn’t necessarily tell the whole story.

If you were to precisely follow the NEDC cycle, you’d achieve the overall fuel-consumption figure, assuming the conditions you drove in matched those of the laboratory. Indeed, if all your driving mirrored the urban cycle, you might end up not using any petrol at all in a plug-in hybrid. However, there are some important limitations to remember.

The NEDC urban cycle test covers a theoretical distance of 3,976 metre – around 2.5 miles. This distance is far less than a plug-in hybrid’s typical all-electric range of around 30 miles, but there’s no mention of how much battery life remains at the end of the test. It could be that a fully charged plug-in hybrid can easily cover the test cycle in all-electric mode, but may struggle to repeat the cycle later in the day with a depleted battery.

Disappointingly, although Kia sets a good example, not all carmakers publish their urban and extra-urban economy figures as prominently as the NEDC 'combined' cycle – you may need to pore through the brochure or dive into the manufacturer's website. This is a shame, because the combined figure can sometimes exagerate the real-world econonomy of certain cars.

For many drivers, the extra-urban (or out-of-town) figure will more accurately portray a typical journey, even though the highest speed reached – 120kph (75mph), a typical cruising speed on fast roads – is only maintained for 10 seconds in the entire test. As a result, if you spend a lot of time on the motorway, even the extra-urban fuel-economy figure probably won’t reflect your true economy.

The same limitation applies to electric cars, whose battery range is measured using the NEDC system. An electric car’s power supply is drained faster at higher speeds than when travelling slower, so it’s possible you’ll experience a far shorter range than claimed if you frequently drive on faster roads. 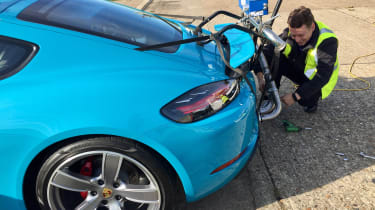 The amount of carbon dioxide (CO2) emitted by a car is measured during the same NEDC cycle used for fuel consumption. As the figure used takes into account the entirety of the cycle, it’s best compared to a car’s ‘combined’ fuel economy figure.

The result is that plug-in hybrid CO2 figures tend to look just as favourable as the fuel economy figures for those cars. During the ‘urban’ cycle, a plug-in hybrid might not use its petrol engine at all, and will therefore emit no CO2.

However, while you may not be helping the environment, you may still be helping your wallet. Irrespective of real-world figures, company-car tax and initial car registration fees are all based on the CO2 claims issued by the factory. A company-car driver who chooses a plug-in hybrid will pay significantly less CO2-linked Benefit-in-Kind (BiK) tax than the driver of a diesel car, irrespective of how or on which roads either car is driven.

The limitations of the NEDC system have been widely discussed and steps are being taken to introduce a more accurate successor. Within the United Nations Economic Commission for Europe, a working party named the World Forum for Harmonization of Vehicle Regulations (WP29) has been formed. One of its tasks has been to establish a uniform system of measurements that’ll be recognised globally, with benefits to international trade listed among the advantages.

Among developments, a replacement for the NEDC will begin to be rolled out in September 2017, although it’ll be September 2018 by the time all new cars sold are affected. Named Worldwide Harmonised Light Vehicle Test Procedure (WLTP), it encompasses a far longer test procedure, with higher speeds and a greater variation of acceleration rates and driving styles simulated.

It’ll also impose strict car set-up and test conditions, claimed to better represent real-life driving, and will take account of the most commonly fitted features and optional extras, with the varying weight of different trim levels contributing to average scores.

WP29 is candid that, regardless of how well designed a test procedure might be, variations between the fuel consumption experienced by different drivers in different conditions must be expected and can’t always be simulated in repeatable laboratory conditions. However, if the promise of more true-to-life fuel-consumption claims is fulfilled, WLTP looks to be a positive step forward for car buyers.

Petrol, diesel or hybrid? Which is right for me?

Even after every new car sold has offers fuel consumption figures measured under the WLTP test procedure, fuel-consumption figures alone may not be enough to help you choose a car that’ll save you money in the long term. However, the reviews published on Carbuyer are intended to help you make an informed decision.

We try to highlight when a car – be it powered by petrol, diesel, electricity or a hybrid or plug-in hybrid system – will be of particular interest to a certain group of drivers, The low official CO2 exhaust figures for plug-in hybrid cars, for example, hold a particular tax advantage for company car drivers.

You can be sure we’ll keep our finger on the pulse when it comes to the latest developments in electric, hybrid and plug-in hybrid cars.