Dear Carbuyer, I want a compact executive car that'll soak up motorway miles. What should I buy for £15,000? 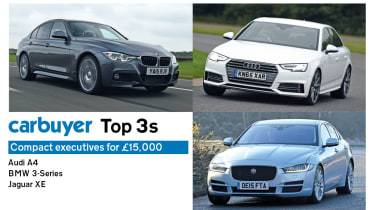 The huge rise in the popularity of SUVs may have taken its toll on family saloon sales figures but premium-badged executive saloons are still strong sellers. This area of the market has traditionally been dominated by German brands but in recent years, the BMW 3 Series, Mercedes C-Class and Audi A4 saloons have faced increased competition – the Lexus IS, Jaguar XE and Volvo S60 are all genuine rivals.

Cars in this category have long been favourites among company car users, and make a great choice for high-mileage private owners, too. The best news is that there are some real second-hand bargains to be had, and our £15,000 budget puts some very appealing cars within reach. Here are three comfortable, great value compact executives that will manage motorway journeys with ease. 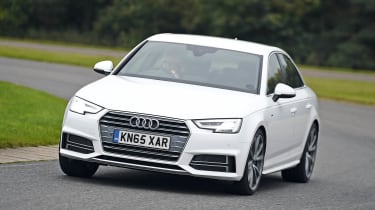 Audi A4 - the comfortable choice

A £15,000 budget will secure you a 2015 Audi A4 with just 28,000 miles on the clock, with the economical 2.0-litre TDI Ultra diesel engine. Although its 0-62mph time of 8.3 seconds is pretty respectable, it’s actually the least peppy of our three choices, but a settled motorway ride makes it the best long-distance steed of the bunch. It's quiet at speed; long gearing and careful attention to details such as wind noise suppression means fast journeys are peaceful and relaxing.

Others may be more exciting to drive, but the Audi still feels precise and secure on a country road, and its light steering makes maneuvering a breeze. A classy interior is probably its strongest suit; it's impeccably built and there's lots of space inside, as well as a sizeable 480-litre boot. Owners are impressed by the Audi's infotainment system, helping the A4 to a 44th place finish in our 2018 Driver Power satisfaction survey.

Buy an Audi A4 on Buyacar 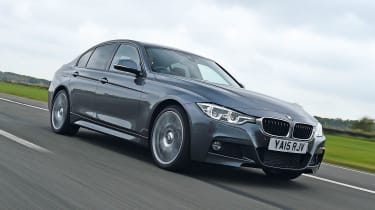 For: Powerful, fine ride and handlingAgainst: Not as smooth and quiet as the Audi

The BMW 320d's nippy acceleration won't just put a smile on your face but is also useful when joining fast moving motorways. Fortunately, the popular 3 Series fits comfortably into our £15,000 budget – this figure will secure a 2016 320d Sport that's covered 39,000 miles. The 2.0-litre diesel is smooth and responsive, and a well balanced rear-wheel drive layout really brings the car alive if you fancy taking to twisty roads and leaving the motorway behind.

It's not quite as comfy and unfussed at speed as the Audi, but isn't as firm as the Jaguar XE, and few will complain of a rough ride, even on the firmer suspension of this Sport model. The boot is identical in size to that of the Audi – but it's worth looking for an example with the 40:20:40 split rear seat, which enables you to carry a long load as well as two rear seat passengers. The 3 Series came 39th in our 2018 Driver Power owner satisfaction survey.

Buy a BMW 3 Series on Buyacar 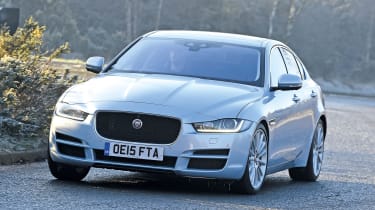 That the British-built Jaguar XE can trump the BMW 3 Series for driver appeal is definitely something to celebrate, even if its 161bhp 2.0-litre diesel engine is less powerful than that of the Audi and BMW. The Jaguar makes up for that with its steering feel and cornering poise, although both German models have a distinct edge on long-distance motorway comfort. They beat the Jaguar for interior quality, too; the XE's interior has some lovely details, but not all the materials used are the absolute best in quality.

£15,000 will secure a 65-plate XE diesel with a manual gearbox and 40,000 miles on the clock. With its 455-litre boot, it can't carry quite as much as its rivals, and the relatively narrow boot opening can make loading a bit more awkward. It's a lovely looking car, with sleek lines that closely resemble its bigger Jaguar XF sibling. Although the Jaguar XE didn't feature in our 2018 Driver Power survey, Jaguar itself finished a long way ahead of Audi and BMW overall.

Buy a Jaguar XE on Buyacar