So long as Toyota and BMW parts get on well, the Toyota Supra should be robust

Lift the Supra's bonnet and it doesn't take long to find BMW logos and stickers on various components, yet much of the car is also a Toyota, leading to an interesting hybrid. Indeed, the Supra is built in Graz, Austria, rather than in Japan. Meanwhile, safety kit impresses. 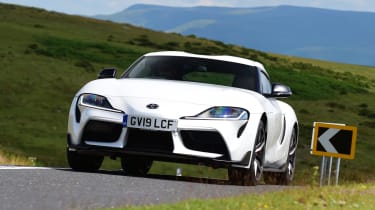 It remains to be seen how well Toyota's amalgamation of components will perform but we wouldn't expect issues given Toyota's long-standing reputation for reliability. A tenth spot overall (out of 30 manufacturers) in our 2019 Driver Power survey, along with a good score for reliability, should reassure customers - just 11.7% of Toyota owners experienced a fault within the first year of ownership.

It's not known if the Toyota Supra will undergo Euro NCAP crash-testing - which doesn't always extend to low volume models - but we do know it's fitted with a host of Toyota's safety kit. It includes lane departure alert (with steering assistance), adaptive cruise control, automatic headlights, blind-spot alerts, rear cross traffic warnings and automatic emergency braking.

The Toyota Supra is closely related to BMW Z4, which scored five stars in Euro NCAP tests, thanks in part to an impressive 97% for adult occupant protection. It's impossible to say how this would translate to the Supra but it’s encouraging for potential owners.