The Toyota Supra is compact but cosy inside, while ride comfort impresses

The collaboration between Toyota and BMW has resulted in a quirky interior for the Supra, with quite a different feel to other models in the range. It manages to feel like a car costing twice as much as a GT 86, though, competing well against rivals like the Alpine A110, while arguably feeling nicer inside than a 718 Cayman.

It's also a car that will cosset you on a long journey, rather than beating you up. By making its bodyshell incredibly stiff (around 2.3 times more rigid than the GT 86), Toyota has been able to fit softer suspension to soak up bumpy roads, that can be firmed up at the press of a button when you head on track. It's better able to soak up bumps than the Audi TT RS or Porsche 717 Cayman S. 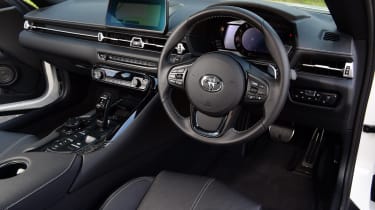 The Mk4 Supra might have become a legend but its interior is not the reason. Needless to say, the latest model feels like a much more upmarket proposition, which is sufficiently different to the BMW Z4 to feel unique.

There's quite a bit of shared hardware but given that Toyota's infotainment system isn't one of our favourites, that's probably no bad thing. The 8.8-inch display is essentially BMW's iDrive setup, albeit with unique graphics and menus. It works well, and brings the option of Apple CarPlay, which is lacking from most of Toyota's range, but sadly Android Auto is still missing. We also enjoyed the heated and ventilated bucket seats, which hug you firmly in corners and offer a good position for the driver. 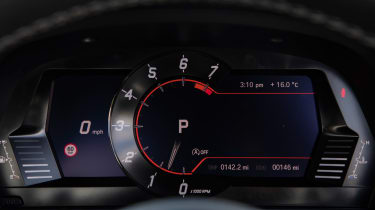 The Supra comes with lots of standard features such as climate control, a rear-view camera, Bluetooth, sat nav and adaptive LED headlights. There's also a Pro upgrade that adds leather upholstery, a 12-speaker JBL stereo system, head-up display, wireless smartphone charging and packs for extra lighting and storage. It seems like a worthwhile choice considering it costs around £1,300 extra, and Toyota expects most customers to buy it.

For a limited time, buyers can also opt for the A90 Edition, which has a unique look thanks to matte Storm Grey paintwork and matte black 19-inch alloy wheels. Inside, the A90 Edition is distinguished by red leather seats and interior accents, including on the steering wheel.

Unlike its rivals, it appears there are very few options for the GR Supra at launch, with just Premium Solid paint (£620) and Premium Metallic Paint (£710) listed. However, this could change as the Supra matures, and the first cars in the UK are likely to be in short supply. A huge aftermarket for Supra upgrades and accessories is also springing up very quickly.