The Supra is one of the most iconic sports cars of the 90s and 00s, and the ability to tune its straight-six '2JZ' engine to produce huge power became legendary amongst enthusiasts.

Toyota didn't want to sully the Supra name by offering any engine other than a straight-six in the new one, but it wasn't producing such an engine for any other model. So, somewhat controversially, Toyota partnered with BMW to share some development costs of the Supra and Z4, and gain access to the German brand’s 3.0-litre performance engines.

It was also decided the Supra should have a shorter wheelbase but a wider stance and a lower centre of gravity than the GT 86, while the Supra also boasts a perfect 50:50 weight distribution and a much stiffer body. Drive quickly on track and the Supra corners with real precision, but there's also lots of adjustability to change the cornering line without any nasty surprises. This ability to play with the car at its limits makes it very rewarding for the driver, and it's no coincidence Toyota has benchmarked the Supra against the class-leading Porsche 718 Cayman.

There's slightly more body roll in the Supra but the car still feels rigid and composed, with lots of grip on dry roads. In the wet, we found the Supra to be more playful, especially if the throttle was applied early in the corner.

It's easy to see why Toyota wanted the Supra to have a six-cylinder engine so badly because it sounds smooth and purposeful, with burbles and even cracks from the exhaust in its Sport driving mode. Power is impressively linear in its delivery, too, with peak torque lasting from 1,600 to 4,500rpm and there’s barely any lag when you accelerate out of a corner or go to overtake slower traffic. Our only complaint is that there's little reason to rev the engine to the redline, but turbocharged rivals suffer from this characteristic too. 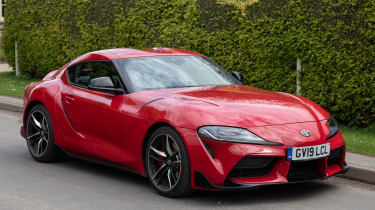 The 3.0-litre produces 335bhp, which is enough to get the GR Supra from 0-62mph in 4.3 seconds and make it the fastest Toyota so far. Launch control is included to help achieve the perfect start, while a Track setting can loosen the reins on the electronic safety net at track days. It might not be as powerful as the BMW M2 Competition, but the Supra is easily fast enough to overtake anything on the public road and satisfy at a track day.

Fans may be disappointed there's no manual gearbox but the eight-speed automatic works well most of the time, even if upshifts can be slightly jerky and downshifts are sometimes a fraction too hesitant. But, despite being just off the pace of Porsche's PDK, the gearbox doesn't blunt the engine's muscular feel, and an electronic rear differential helps the Supra swoop into and fire out of corners. We also much preferred its relatively thin steering wheel to the chunky ones fitted in most BMW M cars, even if feedback is slightly lacking compared with the Porsche.