For a sports car, the Toyota Supra shouldn't be too alarming at the pumps

It might be a similar size to the Toyota GT 86, but the Supra has been designed from the outset to be a more luxurious grand tourer; the intention is that you'd be just as happy to drive the car to the South of France as you would be to do laps of a racing circuit.

Constantly having to stop to fill up with petrol would compromise that ability, but happily the Supra's reasonable fuel economy and 52-litre tank means it should be capable of around 395 miles between stops. 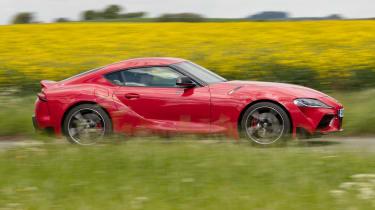 Some of the technology that pushes you back in your seat when you floor the accelerator in the Supra also helps save fuel when cruising. A variable geometry turbocharger and a high-pressure fuel system that precisely sprays petrol into the cylinders, for example, helps the Supra achieve 34.4mpg on the WLTP cycle. An eight-speed gearbox also helps keep revs low at motorway speeds.  During our testing we found it averaged just under 30mpg and was slightly more fuel-efficient than the Audi TT RS and Porsche 718 Cayman S.

It makes an unlikely company-car, but any Supra business drivers will find its 170g/km CO2 emissions place it in the highest 37% BiK band. Annual road tax costs £145 but because the car costs more than £40,000, it incurs a £320 surcharge in the first five renewal years.

The standard version of the Supra is in group 37 and A90 Edition is in 38. This should make the Supra slightly more affordable to insure than the 718 Cayman, which is in groups 42-44 out of 50.

Toyota offers a generous five-year/100,000 mile warranty with all its cars, which could add another selling point for anyone looking to buy a sports car with their head as well as their heart. It certainly beats the three-year cover offered by Audi and Porsche.

Rather like Audi TT RS owners, a vast dealership network means Supra owners shouldn't struggle to get their cars serviced at a handy location. The Supra is also likely to be offered with the same servicing packages as other Toyota models, spreading the cost of maintenance over monthly installments. Of course, given the sporting nature of the Supra, wear items like brake pads, discs and tyres will be much more expensive than for a Prius - or a GT 86 for that matter - and the Michelin Pilot Super Sport tyres are bespoke for Supra.