The Volkswagen CC is cheaper to buy with a petrol engine, but cheaper to run with a diesel

Despite the stylish looks of the Volkswagen CC, it’s actually impressively cheap to run. The diesel engine range is economical and low emissions mean road tax bills are generally manageable.

The cheapest Volkswagen CC to run is the highly efficient 148bhp diesel, but the petrol is less expensive to buy. The fuel consumption of the petrol doesn’t compare favourably to the diesels, though, so if you have high annual mileage, you should consider a diesel CC.

The car’s CO2 output – and consequently how much road tax you’ll pay – differs according to the exact gearbox and engine combination fitted, as long as the car you’re looking at was registered before April 2017 – and the vast majority of CCs on UK roads were. The 148bhp petrol with a manual gearbox, for example, emits 128g/km of CO2. If you select the same engine with a manual gearbox, emissions increase to 133g/km. Strangely, ordering a diesel Volkswagen CC with an automatic gearbox had the opposite effect. 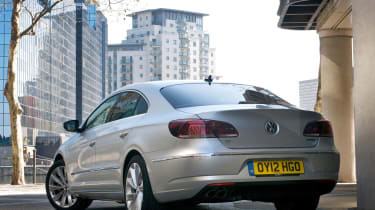 Insurance for the VW CC isn’t going to be particularly cheap, but if you want the most reasonable cover, then go for the less powerful diesel, which is in group 23. In comparison, the Ford Focus is in group 11, while the BMW 4 Series Gran Coupe is in group 30.

VW sells the CC with a three-year/60,000-mile warranty, which is pretty standard in this class, as a BMW 3-Series comes with similar cover. Volkswagen does give you the option to purchase an extended warranty, which will increase cover up to a maximum of five years.

VW offers variable servicing on its models. The company suggests you consider how the car is going to be driven and what it’s going to be used for when deciding which service plan is right for you. If you’re going to use your CC for short urban journeys, then service intervals will be shorter – around 10,000 miles – whereas if you do more than 25 miles every day, then your car will qualify for flexible service intervals. These can be anything between 10,000 and 20,000 miles.