The Volkswagen CC is a comfortable car to while away motorway miles in. All CCs come with sports suspension, but if you bypass the standard model, you get adaptive dampers, too. These enable the suspension to switch between Normal, Comfort and Sport modes. In Sport, the handling is surprisingly sharp, but the steering doesn't match up, so the CC can’t be called a dedicated sports coupe. Its large dimensions also mean it isn’t the most agile car.

The Audi A5 Sportback isn’t any more exciting to drive – for that, you’ll need a BMW 3 Series. But to get a similar sleek, four-door coupe shape to the CC, you’ll have to pay considerably more cash for a BMW 4 Series Gran Coupe. If you want the reassurance of four-wheel-drive grip, then you might want to take a look at an A5 Sportback fitted with Audi’s quattro system. 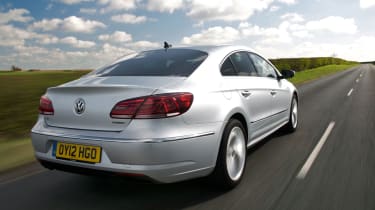 If you can afford to order the Volkswagen CC with VW’s DSG automatic gearbox, we’d recommend you do: the way the VW automatic moves through the gears is impressive. The Volkswagen CC is enjoyable enough to drive, but has quite firm suspension This is definitely not helped by the standard 18-inch alloy wheels fitted to the GT and R-Line models.

The Volkswagen CC is only available with a 1.4-litre TSI petrol engine, but that has enough power to propel the car from 0-62mph in 8.9 seconds. It’s a modern, refined engine that’s pleasant to live with. While a Volkswagen CC with a petrol engine costs more to tax annually than one with a diesel, it costs almost £2,000 less to buy in the first place. It can’t match the diesel’s economy though: the 1.4 petrol returns 49.6mpg compared to the diesel’s 62.8mpg. 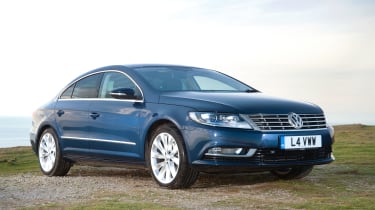 Although the petrol engine is excellent, the diesel options will be more appealing for those covering high mileage. Two versions are available, both 2.0-litres – one with 148 and the other with 181bhp.

The 148bhp has enough power for most drivers. It takes 9.1 seconds to reach 62mph from rest and is quiet and smooth to drive. The faster diesel is worth choosing if you’re willing to pay for the extra performance. It costs roughly £1,500 more than the less powerful one and manages the 0-62 sprint in 8.1 seconds. Both diesels costs £120 a year to tax and are capable and competent motorway cruisers.