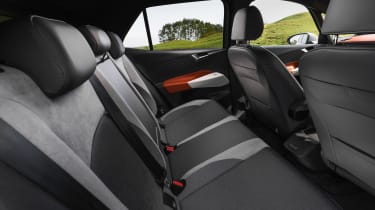 The ID.3 is the first model based on a new system called MEB that will spawn many new electric cars for Volkswagen, Audi, SEAT and Skoda in the coming years. This clean-sheet design has allowed VW to reinvent how a car is structured, taking full advantage of compact electric motors, low-slung batteries and the absence of a transmission tunnel.

Overall the ID.3 is 20mm shorter than a Golf but the distance between its front and rear axles is 13cm longer, maximising interior space and particularly back seat legroom. There’s enough room for adults to sit comfortably in the back as a result.

It all adds up to a car that feels like a Polo in town, looks like a Golf from outside and feels like a Passat for passengers. The lack of a central tunnel makes the car feel wider, and eliminates any fighting for foot space if there are three people in the back. 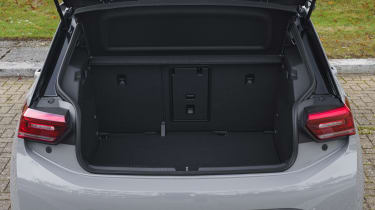 Despite the rear-mounted motor, the ID.3 actually has more room in the boot than a VW Golf, at 385 litres versus 380 litres. Volkswagen didn't see the need to fit a 'frunk' at the front to match Tesla, instead using the space under the bonnet to house the air conditioning system.

With the rear seats down, there’s 1,267 litres of boot space. That’s a bit more than you get in a Nissan Leaf in the same configuration (1,176 litres) although the Leaf is bigger in the back with the seats up (420 litres).

You’ll be able to order bike racks and transport boxes but the ID.3 isn’t able to tow.