The Volkswagen ID.3 is certainly futuristic but material quality has suffered 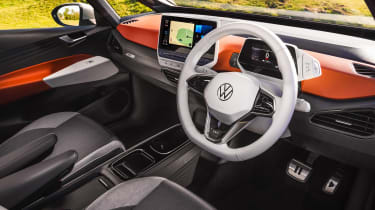 The Volkswagen ID.3 features a futuristic-looking interior design based heavily around touchscreens and touch-sensitive buttons. All the familiar elements of a car interior are here but not quite as you might expect them.

There are few physical controls, and the ID.3’s digital screens are really prominent. The touchscreen infotainment takes centre stage, like it does in the Model 3, and appears to float in front of the dashboard.

Meanwhile, the instrument display sits like a tablet behind the steering wheel. Like in the BMW i3, the gear selector sprouts from the instrument pod, which may take a bit of getting used to but is only needed to select drive, reverse and park.

A light bar beneath the windscreen changes colours to interact with the driver, glowing white when 'listening' to voice commands, giving directions in blue, warnings in red and showing an incoming call by turning green.

The futuristic approach is not surprising - this is the car that represents a new era for Volkswagen after all - but the drop in quality is more of a shock. Soft-touch materials are sparse, replaced with lots of grey and scratchy plastic that seems a big backwards step for a brand that built its name on quality. Electric cars are expensive to produce and we can only imagine this has made margins painfully tight. 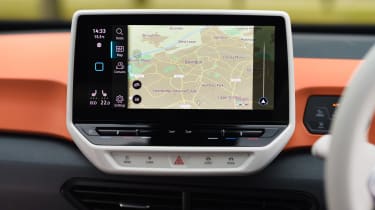 The Business model adds the Design Pack, which includes ambient lighting, LED rear lights, tinted windows and a light band between the headlights and the VW logo. It also has the Assistance Pack, adding illuminated door handles, keyless entry and a rear-view camera for easy parking.

The Tech model has the Design Pack Plus as well as the Infotainment Pack Plus (adds an upgraded stereo and a head-up display) and the Assistance Pack Plus (autonomous emergency braking, keyless entry, a reversing camera and blind spot assist). The Max model is the priciest version you can get with the 58kWh battery and has everything on the Tech model as well as adaptive suspension and the Comfort Pack Plus.

Finally there’s the ID.3 Tour, which has everything bar the adaptive suspension. This is the trim level that comes with the larger 77kWh battery, so it has a longer range than the other models. 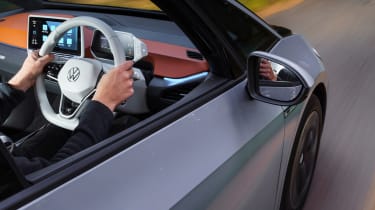 While the 10-inch infotainment system looks futuristic and comes with Apple CarPlay and Android Auto as standard, the move away from physical buttons has made it a little fiddly to use.

Everything’s accessed through the touchscreen, and even the climate control functions are now changed through touch-sensitive sliders. The ride may be good but you often still prod in the wrong place while driving.