"The Jetta distances itself from the Golf with its own look, a longer wheelbase and more room inside."

Based heavily on the Golf hatchback, the Volkswagen Jetta is a great small saloon that offers a little more rear space, a bigger boot and more traditional proportions, all wrapped up in a car that’s still considerably smaller than the Volkswagen Passat.

The good thing about the Jetta’s humble underpinnings is that its mechanicals are well proven, so there should be very few reliability issues to worry about. It’s styled to fit somewhere between the Golf and Passat, too – it’s not terribly exciting to look at, but its design isn’t going to age badly. As is expected from Volkswagen, it’s beautifully built, too.

Volkswagen Golf owners will be instantly at home in the Jetta’s interior, most of which is carried straight across from the hatchback. That’s no bad thing, though; materials and build quality are class-leading, while everything is logically laid-out and easy to use. 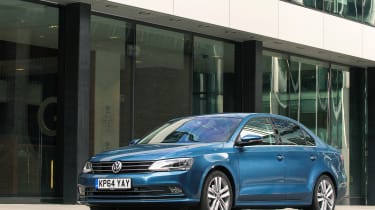 Engines on offer include two 1.4-litre TSI petrols with either 123 or 148bhp, plus two 2.0-litre TDI diesels – one with 108bhp and another with 148bhp. Every model gets BlueMotion technology – Volkswagen’s fuel-saving stop-start system.

The simple Jetta range is divided into three trims – S, SE and GT. Entry-level S is frugal, with standard spec including steel wheels, cloth seats, DAB radio and manual air-conditioning. A step to SE adds welcome extras including 16-inch alloys, upgraded infotainment, split-folding rear seats and a leather multifunction steering wheel. GT spec adds sports seats, a colour multifunction computer and an auto-dimming mirror, plus a few other detail changes. Climate control is an £870 option on all cars, a sunroof will set you back £665 and sat nav is £780.

The 108bhp 2.0-litre diesel engine is the most frugal choice

Thanks to VW's BlueMotion Technology, no engine in the VW Jetta range is particularly heavy on fuel, but if it's efficiency you're going for, one of the two 2.0-litre diesels is the best choice.

If you want the best possible fuel economy, choose the five-speed 108bhp version, which returns up to 71mpg and emits 105g/km. However, we prefer the extra power and six-speed gearbox of the 148bhp engine, which still manages a creditable 67mpg and 109g/km of CO2.

The lower-powered 1.4-litre TSI petrol engine is a good choice for low-mileage drivers, with 53mpg fuel economy. It's cheaper to buy than the diesel in the first place, as well as being quieter on the road.

Jetta resale values on the used-car market aren't quite as strong as for the Golf, but as it's cheaper, any second-hand deals do tend to balance out better than many of the Jetta's rivals.

Sharp handling is on par with the old VW Golf

For a good idea of how the Jetta drives, just look at the previous-generation VW Golf hatchback, with which it shares suspension parts. It has good grip, feels secure and responds nicely to your inputs. 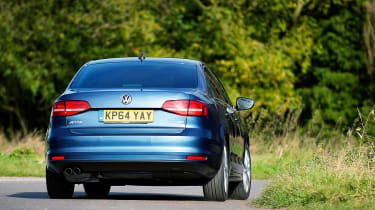 The steering is nice and sharp as well, yet while the 148bhp 2.0-litre diesel engine produces plenty of performance, the 108bhp version and the less poweful 123bhp 1.4-litre TSI petrol need to be worked harder to get the most out of them.

Overall, the Jetta isn't as much fun to drive as a Ford Focus or Ford Mondeo – but then very few cars on the market are.

More space inside than the VW Golf

As the Golf that this Jetta is based on has now been replaced, it can't help but feel a bit behind the times inside compared to some of the competition – especially when it comes to layout and the quality of materials used. 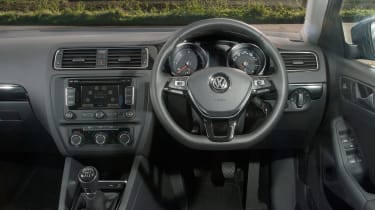 However, thanks to the fact that the Jetta is longer than the Golf, passengers in the back get some more room than they do in VW's family hatchback. The extra 73mm creates what feels like a lot more legroom for those sitting in the rear of the car. That means this saloon model is much more comfortable on longer motorway journeys than the Golf – especially for families.

Big boot, but a hatchback is more versatile

Bigger doesn't always mean better, and while the Jetta's extra length compared to the Golf creates space inside for passengers, the saloon shape reduces its flexibility. You get a 510-litre boot, which is 130 litres bigger than the one in the Golf hatchback, but 75 litres smaller than the one in the Passat saloon. 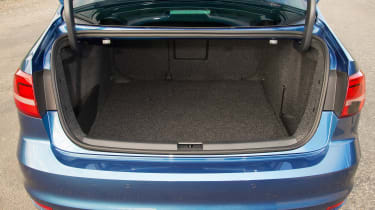 SE and GT models also come with 60:40 split-folding rear seat and ski hatch for loading long, thin objects. There are also handy features such as a shopping-bag hook and 12v power socket. But again, that four-door saloon body shape means that the Jetta isn't quite as versatile as the Golf hatchback (or estate) when it comes to loading and carrying bulky items.

All parts have been tried and tested across VW range

The Jetta itself didn't feature in our Driver Power 2017 customer satisfaction survey, but as it's based on the previous VW Golf, we have a pretty good indication of just how reliable it is; the Golf placed 18th out of 75 models.

As the Jetta shares that Golf's platform, including tried-and-tested gearboxes, engines and other components, reliability really shouldn't be an issue. VW itself came 17th out of 27 manufacturers and had its engines and gearboxes rated well.

In terms of safety, the Jetta comes with a full range of airbags, electronic stability control and anti-whiplash headrests all fitted as standard. A rear traffic alert system and blind-spot monitoring are optional. The Golf on which it's based secured the full five-star rating in the Euro NCAP crash safety tests – although the criteria have become even more stringent since that test was carried out.

Saloon is cheaper than the Golf

The Jetta saloon is generally cheaper to buy than the equivalent Golf hatchback – although obviously it's based on the previous generation – so you get more interior space for your money. 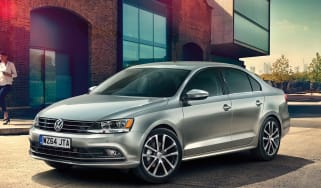 Facelifted VW Jetta is available to order now and starts at £18,815
Skip to ContentSkip to Footer