"The Volvo C30 is a quirky three-door hatchback with attractive styling, but a small boot and only four seats hamper practicality" 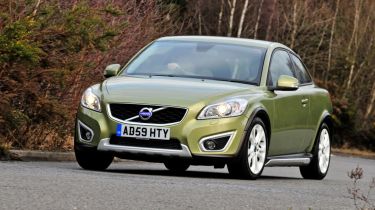 The Volvo C30 is a medium-sized executive hatchback that was a rival to the Audi A3, BMW 1 Series, Mercedes A Class and Volkswagen Golf between 2006 and 2013. It combined style, reliable Ford Focus-based mechanicals and good build quality – although as a strict three-door four-seater, practicality was never a real selling point.

There was a wide range of engines to choose from. Petrol engines ranged from a fairly sluggish 1.6-litre to a five-cylinder 2.5-litre borrowed from the Ford Focus ST. Diesels were popular, with the most economical option being a 1.6-litre that managed 78.5mpg – still a decent figure for a car of its type today. While not intended to be especially sporty to drive, the C30 was pleasant nonetheless, with good comfort and decent long-distance ability.

The C30 was facelifted in 2010 to keep it looking fresh, but ultimately it was replaced by the V40 hatchback, a car that's still on sale today and offers a much broader range of practicality in a more modern package. With the company’s focus on SUVs and traditional saloons and estates, it’s unlikely buyers will be able to buy a direct C30 replacement any time soon.

That said, the C30 still makes a strong case for itself despite its age. The car comes with an engine to suit most budgets and tastes, a good reliability record and even a five-star Euro NCAP safety rating from 2009. If you're in the market for a Volkswagen Golf but fancy something a little rarer and more stylish, the C30 makes for a great used car – especially if outright space and practicality aren't major considerations.

Diesels are cheap to run; fun petrol cars are thirsty

The most economical version of the C30, the Drive-E, used a 1.6-litre diesel engine to claim 78.5mpg with CO2 emissions of 94g/km. Next most economical was the same engine in D2 form, which offered official economy figures of 65.7mpg and 114g/km. While the Drive-E is free to tax, D2 models will cost £20 per year.

Low mileage drivers are less likely to enjoy an overall cost saving by opting for a diesel, and one of the petrol engines could make more sense. The 1.6 and 2.0-litre petrol engines both return between 37 and 40mpg, but CO2 emissions of 167 and 177g/km respectively mean a yearly road tax bill of £210 and £230 respectively, though.

A larger 2.4-litre five-cylinder petrol engine was also offered, but this suffered a higher fuel economy without offering a lot more performance than the 2.0-litre. If you wanted performance above all else, the Volvo C30 T5 is the one to go for – although fuel economy of 25mpg could make a dent in your wallet.

Precise and composed on winding roads

The C30 feels stable and comfortable at speed. Its steering is a little heavier than you'll find in a Ford Focus, but it's precise. We can’t describe the C30 as being especially sporty, though. Driving enthusiasts might find a high-specification Ford Focus or Volkswagen Golf will offer more fun when the mood takes you.

C30 buyers had plenty of engines to choose from. The least expensive to buy new was a 1.6-litre petrol, but it needs to be worked quite hard to make quick progress, and this has an effect on fuel economy.

While the 1.6-litre may be fine if you mostly drive in urban conditions, the open road is far more enjoyable to tackle with the 2.0-litre engine. Its extra power translates into greatly improved driveability and overtaking is easier – and safer.

The T5 offers real performance – its 227bhp makes 0-62mph possible in under 7 seconds, so overtaking is a breeze. It’s more a cruiser than a sprinter, though – the Focus ST is the more rewarding car on a challenging country road.

Diesel models are the most sought-after second hand, and we reckon they’re worth the higher prices they command. The 1.6-litre comes with 108 or 114bhp, and while neither is particularly fast, they are smooth. The 2.0-litre diesels, with either 148 or 175bhp, are far quicker.

The ride is quite bumpy at low speeds

Just like the outside of the C30, the interior places style far higher on its priority list than practicality. It’s classy and attractive to look at, but ergonomics and design have moved on quickly since the C30 was designed.

In common with the Volvo V40, the C30 has a slim centre console that appears to float, with space behind it. It’s one of the most distinctive features of the cockpit, although its effectiveness is spoilt a little by a number of very small control buttons for the infotainment and climate control system. They’re unintuitive to use, and difficult to distinguish from one another, particularly at night.

That quibble aside, those in the front will find the C30 comfortable and quiet, and while its seats are firm, they’re fine places to sit on a long journey. There’s a fair bit of wind noise around the door mirrors, but the engines are quiet – with the exception of the 2.0-litre diesel, which rattles at low speed.

In contrast, passengers in the narrow rear seats have a somewhat raw deal. Headroom and legroom are both limited, and getting in is a challenge for all but the very small. We can’t recommend the C30 as a car for four adults to travel in together.

The C30 doesn’t offer the cave-like boot that you might have expected to find in a Volvo, and accommodation inside the car isn’t especially generous, either. The C30 only has four seats and it feels cramped and quite claustrophobic in the back. There's a central storage area behind that distinctive floating centre console, which is handy, but the door pockets are slim and there are few other storage spaces around the interior.

The boot can take only 251 litres of luggage, far less than any of the of the C30’s competitors. Even with the seats folded, it can only muster 894 litres, which was way behind the likes of the Renault Megane Coupe. Practicality is hindered further by a fabric load cover that doesn’t retract and a small boot opening, which is rather awkward due to its sloping sides.

Volvo forged its reputation on safety, so it’ll come as no surprise that the C30 scored the full five-star rating in 2009 Euro NCAP crash tests. Standard kit includes front, side and curtain airbags, whiplash protection, electronic stability control and a side-impact-protection system.

If you’ve found a C30 with the optional Bluetooth connectivity, it allows the C30’s Intelligent Driver system to stop non-essential calls coming through when the car is accelerating or braking heavily, to avoid distraction.

Volvo owners tend to like their cars. They tell us that the C30’s build quality rivals BMW and Audi, while Volvo came 10th in the manufacturer's’ chart of our 2012 Driver Power customer satisfaction survey.

The C30 wasn’t particularly cheap compared to the likes of the BMW 1 Series and Audi A3 when it was new, but as a used purchase it looks good value. All models are fitted with climate control, electric windows and an MP3-compatible stereo. Although the model range varied throughout the car’s life, you can expect most SE models to pack cruise control and automatic wipers, while SE Sport models came with a bodykit, a leather steering wheel and 18-inch alloys.

SE Lux versions added leather, heated front seats, an electrically adjustable driver's seat and electric folding door mirrors. The R-Design was the top of the range, featuring an even sportier bodykit and lowered suspension as well as an optional power upgrade from Volvo’s performance arm Polestar.