Both diesel engines should give the Volvo S90 decent performance

Let’s get one thing out of the way immediately: the Volvo S90 isn’t an executive saloon in the mould of the BMW 5 Series or Jaguar XF. Both of those cars are good fun to drive and manage to provide an impressively comfortable ride despite their firm suspension. Instead, the S90 borrows its ride and handling ethos from the latest Mercedes E-Class saloon (although it's not quite as comfortable and refined as the Merc). 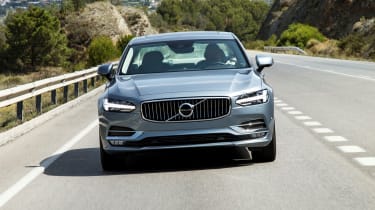 The Volvo has been designed to provide comfortable and relaxing progress, rather than being an exciting thing to drive. That’s not to say that it’s hopeless in corners – far from it – it’s just not quite as planted as the Jaguar and BMW in this regard. When cruising, however, it’s excellent, with a very comfortable ride (as long as you avoid the larger optional wheels) and an impressive lack of wind or tyre noise. We’ve driven the car on 18-inch wheels in the UK and in the most part it was very good, not quite as cosseting as you’ll find in the Mercedes E-Class (although to be fair to the Volvo, very little this side of a luxury saloon is). Combine this with the clever semi-autonomous driving systems and the S90 is a very relaxing car to drive indeed.

If you like everything about the S90 apart from its soft edges, there is an optional Polestar Performance Optimisation package that costs just over £800 and enhances the car's performance. It delivers a small power increase, and sharpens the car's throttle response, gearshift speed and engine performance.

The Volvo S90 is available with a 190bhp 2.0-litre petrol engine. It brings 0-62mph in 8.7 seconds and a top speed of 130mph. However, the equivalent diesel model is quicker, cheaper to buy and cheaper to run. More powerful T5 petrol and T8 petrol hybrid versions are also available. With 250bhp, the T5 gets the car from 0-62mph in 6.8 seconds, making it slightly faster than with the D5 diesel.

Performance from either of the 2.0-litre diesel engines isn’t mind-blowing, but neither will the car feel slow. Even the less powerful 190bhp 2.0-litre four-cylinder diesel will manage 0-62mph in 8.2 seconds and top out at 140mph. 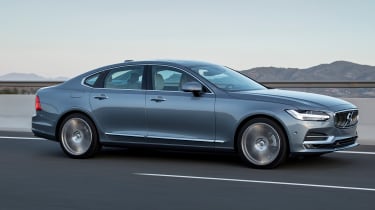 The more powerful 235bhp version uses 'PowerPulse' technology improve the response of its turbocharger. Highly compressed bursts of air are shot into the engine to get it spinning quickly and reduce ‘turbo lag’ – the wait between pressing the accelerator and the turbocharger delivering the power you’ve asked for. This version, which has four-wheel drive as standard, will do 0-62mph in just 7.3 seconds and keep going until 145mph. Both engines come with an eight-speed automatic gearbox.

On the D5, you can also add the Polestar Performance package, which adds an extra 5bhp, giving it 240bhp in total, as well as improving gearbox response. This, combined with better throttle response, should give the S90 a more dynamic and entertaining feel.

The less powerful D4 engine performs well throughout the rev range and is reasonably refined – especially at higher speeds. While the eight-speed automatic gearbox changes smoothly, it takes too long to respond to requests from the driver. There’s a slight hesitancy when pulling away, as if it can’t quite make up its mind, while it takes a while to change down when you want to accelerate, too.