We can’t be sure about reliability, but the Volvo S90 should prove to be outstandingly safe

Volvo’s reputation for reliability isn’t fantastic. Despite an impressive 13th-place finish in our 2016 Driver Power owner satisfaction survey and commendations for build quality, the brand could only manage a 22nd-place finish (out of 32 manufacturers) for reliability. 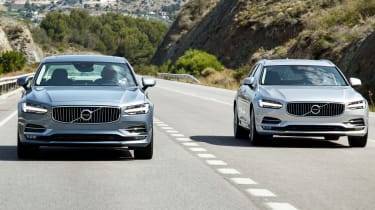 There are no such concerns when it comes to the S90's safety, though. In 2017 testing by independent crash safety experts Euro NCAP, it was awarded the full five star rating, with an excellent 95% score for adult occupant protection, and a sold 80% score for how children were look after in the the event of an impact.

Of course, you get the legally mandated stuff like ISOFIX child-seat mounting points, electronic stability control, tyre-pressure monitoring, anti-lock brakes and a multitude of airbags, but there’s more, too.

Earning the S90 a 93% score for its safety assistance systems, the S90 also features the latest City Safety system, which includes automatic emergency braking with sensors that can detect pedestrians, cyclists and even large animals such as moose, deer and horses, then stop the car before a collision occurs. You can also choose systems which use cloud-based systems allowing multiple cars to communicate to warn drivers of slippery roads or hazard warning lights ahead.

There’s also the semi-autonomous Pilot Assist system, which combines the active cruise control and lane-keeping assistance systems, as well as various other lasers, radars and cameras, to allow the car to very nearly drive itself on a motorway. You have to keep your hands on the wheel for it to work, but work it does.