It may not have the biggest boot in the class, but the Volvo S90 has plenty of interior space

Gone are the days when Volvo stood almost exclusively for functional, useful, but also fairly dull practicality. The brand is now mostly about style and prestige and while that’s not to say the S90 is an impractical car, it’s more that sheer volume is no longer the highest item on the priority list. There’s plenty of adjustment for both the steering wheel and driver’s seat, too, so finding the right driving position is easy and the view out is always excellent.

In terms of interior storage, the S90 is fine – it doesn’t have the same vast quantity of cubbies that you’d find in an MPV, but there’s a good-sized glovebox as well as a couple of cubbies in the centre console. The door bins are a decent size, too. Four six-foot adults will be able to travel in the S90 with ease, as there’s a very generous amount of space in the back, while it won’t get too dark, either – especially if you specify the optional sunroof. 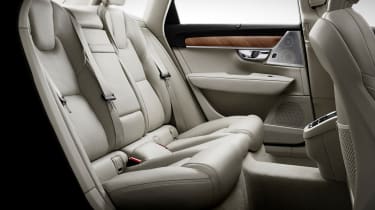 While the S90 is not right at the top of the pile when it comes to boot space, it’s not disappointing, either. There’s 500 litres worth of space back there, putting it slightly behind rivals like the Jaguar XF, Audi A6, Mercedes E-Class and BMW 5 Series, but not by very much. That’s slightly more than you’ll find in the Lexus GS and Infiniti Q70, however. 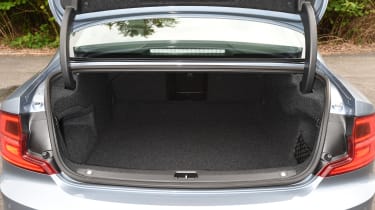 Although the S90's boot is of a good, square shape, there is a large load lip over which you'll have to haul heavy items, but then that's the case in pretty much all of its rivals, too.