The Volvo V40 Cross Country hatchback is sensible rather than fun to drive, but it’s capable in fast corners

Due to the Volvo V40 Cross Country's raised suspension, there's a fraction more body lean in corners than in the standard V40 – but not enough to upset the car's balance. All models, except the range-topping 250bhp T5 petrol, are front-wheel drive, so they do without 4x4 grip. Even so, the V40 handles well.

The steering could react a little quicker to your inputs, but it was never Volvo's intention to build a sporty car. Instead, the V40 Cross Country is quiet and relaxing, making it perfect for long family trips.

There are only two petrol engines available with the V40 Cross Country, but neither of them is short on power. The T3 model is a 148bhp 2.0-litre engine, offering a reasonable amount of mid-range shove that helps the car to cover 0-62mph in 8.5 seconds. 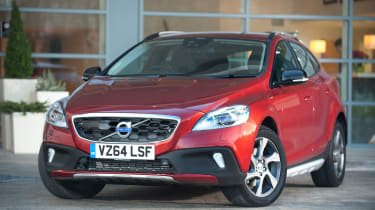 The other option is the T5, which comes with an automatic gearbox only and is the fastest and most extravagant V40 Cross Country available. Its 2.0-litre engine produces 242bhp and it’ll hit 62mph from rest in just 6.1 seconds, which is up there with some sporty hot hatchbacks. This is also the only V40 Cross Country with four-wheel drive.

The entry-level 1.6-litre D2 diesel engine is least powerful of the range, producing 118bhp and taking 10.6 seconds to cover 0-62mph. It is the most economical model in the range, though, and makes a lot of sense for company-car drivers and private owners who don’t want to pay road tax. Despite the low power it feels reasonably brisk, though frequent gear changes are required when pressing on.

Move up one level to the 2.0-litre D3 engine and the V40 becomes a bit quicker. This version has 148bhp and is good for 0-62mph in 8.5 seconds thanks to some more mid-range shove, so we think it's a good all-rounder.

The fastest diesel is the D4 model, which is rapid enough to be considered a diesel hot hatchback in its own right. It has 187bhp, heaps of pulling power and a 7.7-second 0-62mph time. If you can afford the extra cost compared to the other diesel engines, then the D4 is a great choice, because as well as being fast, it’s almost as economical as the entry-level D2.