Volvo is a byword for car safety and the Volvo V40 Cross Country has more features to protect passengers and anyone it’s likely to come into contact with than most other passenger cars. It boasts a pretty good reliability record, too.

The Volvo V40 was rated below average for reliability in our 2017 Driver Power owner satisfaction survey of cars currently on sale in the UK. Of the owners who responded, 19.3 reported experiencing a problem with their car at least once. 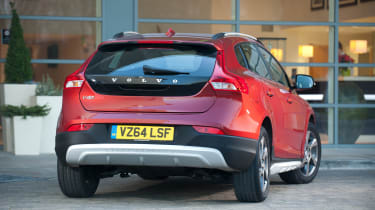 It’ll come as no surprise that the V40 has a five-star Euro NCAP crash-test rating, because Volvo has one of the best – if not the best – reputations for safety in the motor industry.

The car comes loaded with protective technology as standard, including the company’s City Safety system (which automatically hits the brakes if it detects an impending front-end crash at urban speeds), seven airbags, technology that pops the bonnet up slightly to soften the impact if it senses that pedestrian is likely to hit the front of the car and a whiplash protection system – among many other features. These features helped the V40 achieve a perfect (and rare) 100% score for safety assist technology in its safety tests.

If that’s still not safe enough for you, then there’s always the £1,900 Driver Support Pack, which comes with a blind-spot information system, a lane-keeping aid designed to stop you from veering out of your lane and active cruise control that automatically keeps the car a safe distance from whatever it’s travelling behind.