The problem with the Volvo V40 Cross Country is that it costs quite a bit more to buy than the conventional model, which does without the high ride height and tough exterior styling additions. Add to that the fact that it's only available in mid and top-of-the-range trim levels and you're looking at quite an expensive car. If it were a larger and more spacious SUV, then you'd expect to pay a bit more, but it's pretty pricey for a hatchback.

The V40 Cross Country has a good choice of diesel engines, the most economical of which is the 1.6-litre D2 version, which returns 76.3mpg and emits 99g/km of CO2 for low Benefit-in-Kind tax for company-car drivers – although it's the least powerful engine in the range.

Two more diesel engines are available. The first is the 2.0-litre D3, which offers a still fairly economical 74.3mpg and 99g/km CO2 emissions. The D4 engine (also a 2.0-litre) is the most powerful of the three diesels, but it's only slightly less efficient than the D3, returning 70.6mpg economy and 104g/km emissions. Given the performance it's capable of, those figures are seriously impressive. 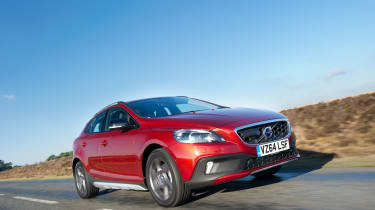 There's a choice of two petrol engines. The more conventional T3 has similar performance to the aforementioned D4 diesel – it offers 51.4mpg economy and 128g/km emissions, which isn't bad for a punchy petrol engine.

The other petrol option is the four-wheel-drive T5 model, which is extremely fast and pretty efficient when you consider how quick it really is, returning 44.1mpg and emitting 149g/km of CO2. On the downside, it's very expensive for what it is and you won't necessarily see that kind of fuel economy in your everyday driving.

Insurance groups start relatively low for the D2 models – you're looking at group 16 for the entry-level D2 SE. They leap into the low 20s for the more powerful models, though: D3 versions are either in group 21 or 22, while D4s are in 24. The T4 petrol is also in group 24, while the top-end T5 will be the most expensive of the lot to cover, sitting in group 30.

Volvo offers a standard three-year/60,000-mile warranty for the V40 Cross Country, which isn't anything special, but it's comparable to the cover you get with the small premium SUVs the car competes with. The only rival that outshines it is the BMW X1, which has three-year/unlimited-mileage cover.

Services for the V40 Cross Country are recommended every year or 20,000 miles – a relatively long interval. The brand offers a service plan for new and used cars, which can cover them for between two and six years depending on the age and the model. Volvo doesn’t publish prices for this package due to the difference in age and type of cars it’s likely to cover. Instead, the company encourages customers to get in touch for a personalised quote.