The Volvo V40 Cross Country is similar in size to the upmarket hatchbacks that the standard model goes up against. At 4,470mm long and 1,783mm wide, it’s comparable in length and width to the Audi A3 Sportback, which is 4,310mm long and 1,785mm wide, although the jacked-up ride height obviously makes the Cross Country a bit taller than most. The view out of the rear window is limited, so it could be worth specifying parking sensors.

Two cup-holders and a 12v power outlet are built into the V40 Cross Country’s centre console in front of the armrest, while the glove compartment includes space for two drinks cans or bottles, which are kept cool with cold air from the climate-control system. 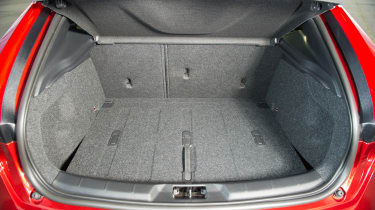 Space in the back is a little limited and the small SUVs that rival the Volvo and even a lot of family hatchbacks do better here. There are ISOFIX child seat mounting points on the rear seats.

On the plus side, a clever two-tier system helps to maximise the boot floor, so you can load your shopping bags on two levels. However, the boot opening is quite small, so loading bulky objects can prove tricky. The Cross Country also includes a tyre-repair kit as opposed to the more reliable full-size spare wheel.