The Volvo V60 estate is a bit longer than rivals, and that shows in its interior and boot space

Volvo has gone somewhat full circle, because after shunning its reputation for boxy estates by making the last V60 sleek but somewhat impractical, the latest model has a far bigger boot. Thankfully, clever design means Volvo has ensured it still looks good, too. 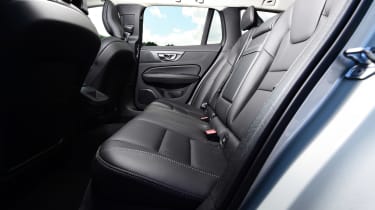 The V60 is longer than both the BMW and Audi, but you probably wouldn’t notice until you sit inside. Because when you do, there’s plenty of space for six-footers to fit in the front and back seats with room to spare. There are a few small niggles, though, including cramped rear footwells if the front seats are in their lowest positions and a transmission tunnel that impedes on foot space for a middle passenger. 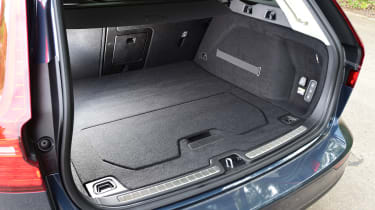 Once the boot whirs open, there’s 529 litres behind the rear seats, making it one of the best load-luggers in the class. Crucially this beats the 505 and 495 litres of the Audi A4 Avant and BMW 3 Series Touring in a game of executive estate Top Trumps. There are neat features that remind you Volvo has been making estates for a while, too, like the flip-up divider you can attach shopping bags to, keeping them secure on the drive home. The rear seats and headrests can be folded down at the touch of a button in the boot, and when flat there’s 1,441 litres of room.

Every V60 can tow a heavy enough trailer to satisfy most customers, with the B3 petrol able to haul an 1,800kg trailer. If you want to pull a really large caravan or even a boat, the B4 (D) and B6 can manage a 2,000kg trailer, as can both plug-in hybrids. The Cross Country's four-wheel drive and extra ground clearance could also be a boon on wet campsites or greasy boat-launching slipways.