It’s not the king of boot space anymore, but the Volvo V90 has plenty of space inside

A Volvo estate isn’t just a box on wheels any more. Instead, the V90 is now very much a design-led proposition. That’s not to say it has a ridiculously small amount of boot space, just that it’s no longer the car’s sole focus. The V90 remains a practical family car (although the first time a child rubs biscuit crumbs into the soft leather seats or gets jam on the delicate touchscreen, you may weep slightly inside) but there’s plenty of space inside, as well as various family-friendly accoutrements.

In terms of interior storage, the V90 is fine – it doesn’t come with the same vast number of cubbies you’d find in an MPV, but there’s a decent-sized glovebox, as well as a couple of handy storage spaces in the centre console and a helpfully large one under the armrest. 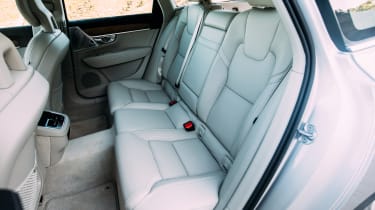 There are a couple of cup-holders up front, while passengers in the back will find a couple in the flip-down armrest between the two outer rear seats. The door bins are a decent size, too. Four tall-ish adults will be able to travel in the V90 easily, as there’s a very generous amount of space in the back, while it won’t get too dark, either – especially if you specify the optional sunroof.

The V90’s boot is something of a mixed bag. With the rear seats in place, it’s got a perfectly decently sized load area, measuring in at 560 litres. This puts it about on par with other cars in the class. Drop those rear seats down, however, and you’ll find it’s no longer quite so generous. The available total of 1,526 litres is some way behind what the BMW 5 Series Touring and Audi A6 Avant offer (both have more than 1,600 litres of space), while the Mercedes E-Class Estate and Skoda Superb Estate can both hold up to 1,950 litres. 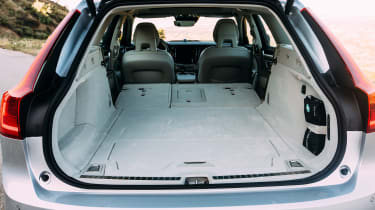 That being said, the V90’s boot, even with the rear seats folded down, is a very good, square shape, allowing you to use all the space on offer. Also, the load lip is nigh-on non-existent and the rear seats fold very nearly flat, so sliding large, heavy objects in and out should be easy, while there are plenty of practical touches – hooks, storage nets and an electric tailgate are all very welcome.