Whichever diesel you go for, the Volvo V90 should offer perfectly acceptable performance

Let’s get one thing out of the way: you won’t have as much fun behind the wheel of the Volvo V90 as you would in the BMW 5 Series Touring. That car has been set up to reflect BMW’s ‘Ultimate Driving Machine’ tagline, while the V90 is aimed at those after a more relaxed driving experience. If you’re moving over from an Audi A6 Avant, though, you’ll likely be more than happy with how the Volvo feels from behind the wheel, and if you use the clever semi-autonomous driving systems, then you’ll find the V90 is a very relaxing car to drive indeed.

While it isn’t especially agile on a challenging B-road, the V90 is far from useless in corners – it’s just not quite as planted as the BMW. It leans into bends far more than the BMW, while its steering is lighter and lacks sufficient feel. Away from corners and at cruising speeds – on the motorway, for example – the Volvo is excellent, with a very comfortable ride and little intrusion from wind or tyre roar.

With its lower, stiffer suspension, the R-Design feels a little more wieldy, but has a rather less comfortable ride than Momentum and Inscription models. Also available is an optional adaptive air suspension system. Once you put it into 'Comfort' mode it gets a bit wallowy and rolly, but firm things up and you're more aware of any bumps in the road. It's never uncomfortable, it's just not quite as excellent as rivals like the 5 Series Touring. 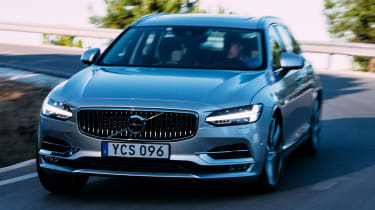 The D4 engine produces 187bhp, enabling the V90 to cover 0-62mph in 8.5 seconds. The same 2.0-litre diesel engine in D5 form produces 232bhp, beating the 215bhp 3.0-litre V6 diesel of its similarly-priced rival, the Audi A6 Avant. It's a punchy performer, too, giving good acceleration through the mid-range and getting you up to motorway speeds quickly, allowing you to stay at a fast cruise without working the engine too hard.

The Volvo uses clever ‘PowerPulse’ technology to spool its turbocharger up faster, helping it to accelerate the car from 0-62mph in just 7.2 seconds with very little hesitation – and the added traction that comes with its standard-fit four wheel drive system. Every V90 is electronically limited to a top speed of 112mph, like all Volvo models produced from mid-2020.

Sadly, the Volvo can’t compete with the Audi for smoothness – the Volvo’s four-cylinder engine roars and rattles under hard acceleration while the Audi’s six-cylinder engine just growls enthusiastically – a more pleasant sound to be accompanied by on a long journey. 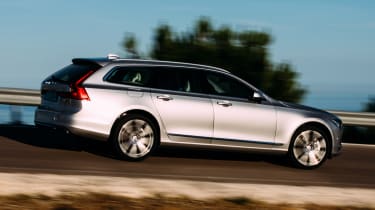 Unfortunately for manual-gearbox fans, the V90 is only offered with an eight-speed automatic gearbox. This does, however, make a great contribution to the relaxed nature of the car, shuffling quickly and almost imperceptibly through the gears.

Those who make lots of short or urban journeys will be better matched with the mild-hybrid petrol B4. It uses a 2.0-litre turbocharged four-cylinder petrol engine that produces 194bhp. 0-62mph takes 7.9 seconds. A more highly tuned B5 version of this engine was then introduced, with 247bhp it gets the car from 0-62mph in just under seven seconds, making it slightly quicker than the D5 PowerPulse diesel version. There’s also a B6 petrol engine with 296bhp and four-wheel-drive, which gets from 0-62mph in a hot hatch-rivalling 6.2 seconds.

Every Volvo now comes with a plug-in hybrid option, and the V90’s is called Recharge T6. It combines a turbocharged 2.0-litre petrol engine, an electric motor and a battery pack. When petrol and electric power combine, the Recharge T6 is the fastest-accelerating model in the range, hitting 0-62mph in under six seconds. A near-400bhp ‘T8 Twin Engine’ plug-in hybrid was previously offered.