To drive, the Volvo XC90 feels more like a road-biased SUV than a full-on 4x4 off-roader. This means it rides comfortably and grips well on most road surfaces, however it does lean a bit if you go around a corner quickly and we think the steering feels a little too light. If it's driving thrills you want, you might be better off with a BMW X5 or Porsche Cayenne. 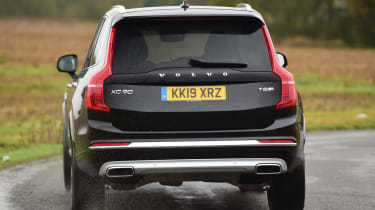 The 232bhp B5 diesel engine was expected to account for around three-quarters of all new XC90 sales when it launched. As we’ve come to expect from Volvo diesels, it’s a smooth and quiet performer capable of getting the XC90 up to speed with relative ease. This makes it our pick of the range for high-mileage drivers, even if the B6 petrol's extra power makes it a bit more fun to drive. Though the B6 is more powerful, the diesel XC90 often feels the more urgent because of its superior pulling power.

The 2.0-litre B5 (P) petrol packs a 247bhp punch, getting the XC90 from 0-62mph in 7.7 seconds. That's almost identical to the B5 diesel, which has less power but considerably more torque.

The 296bhp B6 is impressively economical for a powerful petrol engine but it’s still not as economical as the B5 diesel – not to mention being more expensive to buy in the first place. The engine is punchy and provides a strong turn of speed, taking it from 0-62mph in 6.7 seconds, but the strange, whiny noise it makes puts you off using all of its performance. The petrol is therefore hard to recommend unless you really want the livelier performance and can live with the higher fuel bills.

The T8 Twin Engine plug-in hybrid pairs a 299bhp petrol engine with an 86bhp electric motor. In theory, it offers an appealing combination of ultra-low emissions, excellent fuel economy and eager performance. We found it just as pleasant to drive as the petrol and diesel models, and by far the quickest – the combined power output of the engine and electric motor makes it the most powerful XC90.

That shows when you accelerate hard with the hybrid model in power mode, where both the petrol engine and electric motor are delivering full power. The car will do 0-60mph in 5.8 seconds in this setting, and is also impressive when you demand thrust on the move for overtaking. While straight-line performance is very good, the hybrid is like the other models in the range as far as cornering is concerned; the relaxed steering and high centre of gravity mean it doesn't handle like a sporty SUV. It's better to think of the XC90 T8 as a quiet and comfortable cruiser with extra power when you want it.

All the engines are incredibly quiet until you accelerate hard – and even then the diesel sounds reasonably cultured rather than rattly. The petrol is similarly smooth and quiet, but the four-cylinder whine sounds unusual in a car this size. At the moment, the petrol and diesel XC90s available in the UK are four-wheel-drive only, however a 190bhp front-wheel-drive diesel model could possibly be added to the range in the future.