Like its predecessor, the new Volvo XC90 offers a huge amount of space for passengers and luggage inside

Owners of the previous Volvo XC90 will be delighted to learn that the latest model has even more space inside than its roomy predecessor. You could just about contemplate putting adults in the third row of seats – not something that can be said for many seven-seat cars – and the boot is generously sized whether the second or third-row seats are up or down.

Unusually, choosing the hybrid version doesn't make the car any less practical. Often hybrid models have a smaller boot and less rear legroom due to the location of the batteries. Not so here. 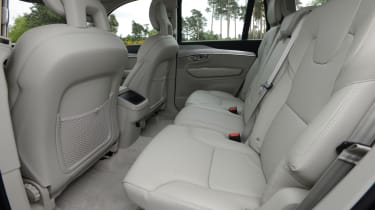 Interior space has always been a Volvo XC90 hallmark and that hasn’t changed with the new model; in fact, it’s better. Unlike many seven-seaters, the XC90’s seats are all the same size – even the two in the third row – and each row of seats is slightly higher than the one ahead of it, like a cinema, giving everyone a great view out the car’s big windows.

One bugbear is that the floor beneath the second row of seats isn’t completely flat, due to the presence of a tunnel for the car’s four-wheel-drive system (and the batteries in the T8 Twin Engine plug-in hybrid model). On the plus side, there are plenty of storage spaces dotted around the cabin, although we’d like the glovebox to be slightly bigger.

Even with all seven seats in place, the new XC90 boot can hold up to 302 litres of luggage, which is more than you’ll fit in most MPVs. Folding down all the second and third-row seats frees up a huge 1,856 litres of boot space – ideal if you’re heading to IKEA to replicate the XC90’s classy Swedish design in your home. 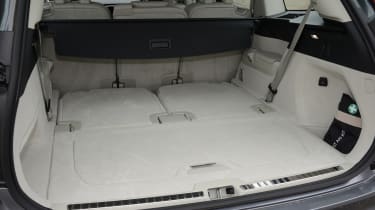 Both the B5 diesel and B6 petrol versions of the new XC90 can tow a hefty 2,700kg, making them ideal for pulling a large caravan (although we’d always favour a diesel for this kind of work). The B5 (P) petrol and T8 Twin Engine hybrid XC90 reduces the limit a bit to 2,400kg, but this isn’t bad when you consider the fact that some rival hybrid models aren’t suitable for towing at all.