We reckon the XC90 is only just behind the Audi Q7 in the large SUV class when it comes to smoothness and tranquility – there’s a vague hint of wind noise around the mirrors (which sit back on the front doors to improve forward visibility), but it’s only really noticeable due to the general quiet and calm that prevails inside the car. Overall, Volvo still isn’t quite up to Audi’s standard when it comes to interior quality, but it's not far off and the sense of style and airiness is still very impressive. 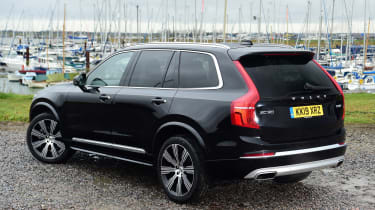 One of the stand-out features of the new XC90’s dashboard is its portrait-style infotainment screen. We love it, although it does take a little bit of exploring before it becomes truly intuitive and it's prone to fingerprints. Volvo says you'll get at least a 45-minute handover in the dealership to explain everything and we’d say this is well worth doing.

There are only eight buttons on the XC90's dashboard and they’re all sensibly arranged, with one big volume/on/off button for the stereo. The display screen is controlled by buttons on the steering wheel, which are easy to get the hang of.

The T8 model also gets a crystal glass gearlever to mark it out from lesser models – very bling.

The Volvo XC90 model line-up is very straightforward, with two of the three trim levels (which are Momentum, R-Design and Inscription) offered with the full engine range of B5 diesel, T5 petrol, T6 petrol or T8 hybrid. You can only choose the two lower engines on Momentum trims. Four-wheel drive and seven seats are standard on every model, along with Volvo's Sensus sat-nav system, LED headlights, an advanced air-filtration system, hands-free boot opening, keyless entry, a power-adjustable driver’s seat, auto-dimming mirrors and DAB digital radio.

The R-Design version is intended to be the sporty XC90, featuring a special design of leather-trimmed front seats as well a different design of front grille, a front spoiler, silk metal window surrounds, integrated dual exhausts, integrated silver roof rails and silver matt mirror covers. Some 20-inch R-Design alloy wheels complete the look. The Inscription model, meanwhile, is intended to be a more elegant and luxurious take on the XC90.

In addition, the 19-speaker Bowers & Wilkins stereo system is incredibly detailed and punchy. It won the Best Audio System award for cars costing more than £25,000 at the 2016 Car Tech Awards. Judges praised the "staggering detail, enabling individual instruments to be heard" and said that "rarely has every nuance and detail of the music been so apparent".

Some of the advanced safety kit is definitely worthy of investment, as is the Sensus Connect infotainment upgrade as it includes Apple CarPlay and Android Auto connectivity.

Volvo also offers a built-in Spotify music app, which will enable you to stream your music straight through the car, instead of needing to connect it via Bluetooth. There's also a Connected Service system which can book the car in for a service at a local Volvo dealer remotely and notify you if there's anything wrong with the car.

The Volvo XC90 is Volvo's most advanced car yet when it comes to technology – both in terms of the infotainment system and also the driving assistance and safety systems. The car won the 'Most-user friendly tech - cars over £25,000' award at the 2016 Car Tech Awards, where judges praised Volvo for making the car "in tune with modern connected living" and was also highly commended in the 'Best in-car connectivity - cars over £25,000' category.

Starting with the infotainment system, the XC90 features a smart tablet-style touchscreen in the centre of the dashboard. It looks modern and is easy to operate once you've used it a couple of times. It can be quite daunting on the first attempt, but it's very responsive and crisp, so once you're accustomed to it, it's very easy to swipe through menus and access all of the car's functions. 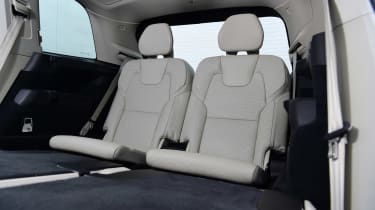 In place of traditional dials, the XC90 features a TFT screen that can be configured how you want it: for example showing the sat-nav instructions and map in between the dials. This is very clear and makes following directions very easy. The sat-nav system itself is impressive, too. The interface is easy to use, plus the large screen displays the directions very clearly. In combination with the instrument display and optional head-up display, the sat-nav system is very good. You can even pinch to zoom on the map, which is very user-friendly.

As you'd expect from a luxurious car like the XC90, there's a sound system to go with it. You can specify a high-end system by British brand Bowers & Wilkins, which we've found to be very impressive. There are different options to optimise the experience based on how many people are in the car, and you can even make it sound like you're in the Gothenburg concert hall. It's very effective and solidifies the XC90's technology credentials.

Where Volvo has really pushed the boat out is with safety and driving-assistance technology. The XC90 is one of the safest new cars you can buy, featuring systems that alert you to cars and objects in your blind spot, a cross-traffic alert system and 360-degree cameras to help you park – that's if you don't ask the car to do it itself, which it's more than capable of doing. It also has the ability to sit in queueing traffic and speed up and slow down itself, thanks to an adaptive cruise-control system.