Recent updates to the Alfa Romeo MiTo have improved fuel economy and reduced CO2 emissions. However, the car’s used values aren’t as impressive as rivals like the MINI and Audi A1, plus servicing isn’t cheap.

Even the thirstiest 168bhp petrol Alfa Romeo MiTo Veloce model, which has a 1.4-litre engine, posts an average fuel consumption figure of 52.3mpg and has CO2 emissions of 124g/km. At the other end of the scale, the 1.3-litre diesel engine returns an outstanding 83.1mpg, while CO2 emissions of 89g/km mean this model is likely to appeal to company-car drivers, thanks to its 20% Benefit-in-Kind (BiK) band. 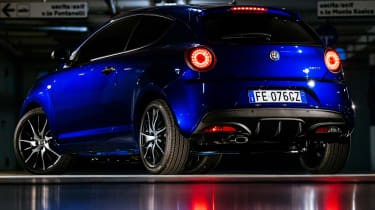 The cheapest route into MiTo ownership is the 77bhp 1.4-litre engine, but its emissions of 130g/km are high and an official fuel economy figure of 50.4mpg isn’t great either.

And then there’s the TwinAir engine, a tiny 0.9-litre two-cylinder that boasts CO2 emissions of 99g/k and very impressive on-paper fuel economy. However, few will ever come close to the 67.3mpg Alfa claims; something in the region of 35mpg is more likely. Its 18% BiK band is even lower than the diesel, however.

All Alfa MiTo engines have stop-start technology, which cuts power when the car is at a standstill to save fuel, so in general the MiTo is a good choice for keeping your fuel bills low. After the first year’s CO2-based road tax (generally included in the on-the-road price), all MiTos cost £140 a year to tax.

With a wide spread of insurance groups, ranging from group 11 to group 26, insurance costs for the MiTo vary a lot depending on individual models' performance. The diesel is in groups 13 to 14, while the 170bhp MultiAir falls into group 26.

The Alfa Romeo MiTo comes with a three-year/unlimited-mileage warranty, which is split into a two-year manufacturer warranty and a further year’s dealer warranty, although both have the same terms. There’s an eight-year anti-corrosion warranty, too, plus a three-year free breakdown recovery deal.

Running costs are kept in check by a well-spaced service interval of 18,000 miles, rising to 25,000 miles for the diesels – or every two years, whichever is sooner. However, Alfa Romeo has a pretty small dealer network, so you’ll need to check how close your nearest franchise is.

You can go for Alfa's 'Easy Care' service plan, which lets you pre-pay for your services, including all parts and labour. A three-year plan costs £499.