Sadly, the Alfa Romeo MiTo doesn’t offer sufficient driver enjoyment to live up to its stylish Italian exterior. All MiTos come with Alfa's DNA system, which has three modes – Dynamic, Normal and All-Weather – that adjust the engine power and steering response.

It works, to a degree. Dynamic is sporty, making the steering heavier and the accelerator more reactive, but even in this mode the Alfa can’t match the driver engagement and agility of the MINI and it actually makes the MiTo more of an effort to drive. If you stick with the Normal setting, the steering is light and the MiTo is at least easy to drive in town.

Even in cars with adaptive dampers (which can soften and harden the suspension), the DNA system doesn’t prevent the suspension from being too firm and overall comfort isn’t great.

The 170bhp Alfa Romeo MiTo Veloce is the quickest in the range, capable of 0-62mph in 7.3 seconds. Compared to other small sporty hatchbacks such as the Renaultsport Clio, Ford Fiesta ST and MINI Cooper S, the MiTo Veloce has less power and is nowhere near as much fun to drive. Its automatic gearbox isn’t great either. Factor in a high price and it's not a model we recommend buying.

The 135bhp version of the 1.4-litre petrol engine is cheaper and comes in Super or Speciale trim, but again it’s only offered with the jerky TCT twin-clutch automatic gearbox. Taking price out of the equation, it’s easy to make a case for this engine: it offers performance that backs up the MiTo’s position as a sporty little hatchback. But for a little more than the £18,000 asking price, you could buy a genuinely sporty car, like a Ford Fiesta ST. 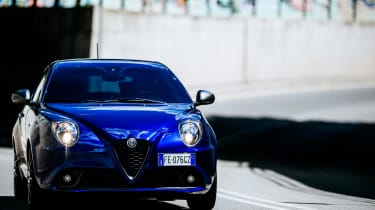 The 0.9-litre TwinAir engine is much more affordable. It’s not a very spritely performer (0-62mph takes 11.4 seconds), but it’s happy to be revved hard and throttle response is good at low speed. On the downside, its two-cylinder layout generates a distinctive hum and vibration, so it’s a bit noisy for such a stylish car. To keep up momentum, you’ll need to be changing gears frequently.

There’s also a 77bhp version of the 1.4-litre engine, but it’s out of its depth on the motorway and only really suitable for round-town use.

The 1.3-litre diesel is the MiTo to go for if you want the lowest fuel bills, but with just 94bhp, it’s pretty underpowered, taking 12.5 seconds to hit 62mph from rest.

The diesel engine isn’t particularly quiet and has more diesel clatter than the equivalent MINI or Audi A1. It’s equipped with a five-speed manual gearbox.

It’s worth noting that due to the way the diesel engine delivers its power, if you’re looking for something nippy around town, you’d be better off with a petrol.