Alfa Romeo MiTo interior storage and rear passenger space is poor, but the 270-litre boot is big enough for a week’s shopping

Even though the Alfa Romeo MiTo is a small three-door hatchback, you can use the rear seats – just. It's awkward to actually get in the back and it's only advisable for short journeys, but it's no worse than the Vauxhall Adam. The boot offers 270 litres of space, which is just eight litres less than you get in the more practical MINI 5-door.

Space in the front two seats is on par with other cars of a similar size, although there’s not much in the way of usable storage for your things. The glovebox is a little on the small side, but all models except the entry-level version get a front armrest with a storage compartment, which can be added to the most basic model for just over £100, or as part of the £310 Comfort Pack. 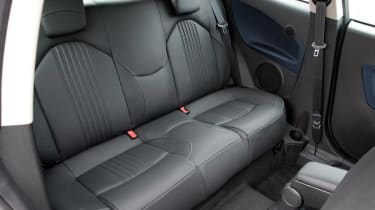 Space in the rear is less abundant, and it’s not particularly easy to climb into, thanks to a sloping roof and front seats that don’t move out of the way enough. It’s quite claustrophobic, too, due to the shape of the rear side windows, and there’s no storage space to speak of.

The MiTo is a four-seater as standard, but for £450, you can add a third rear seat and headrest. This option also gives you a 60:40 split-folding seat, rather than the fixed one-piece folding rear bench that’s standard. Even so, this is a feature that ought to come as standard in a car that can cost close to £20,000.

The MiTo has a deep 270-litre boot, which is big enough for a couple of suitcases or plenty of shopping. However, the low boot floor makes loading things over the high lip a bit awkward at times and with the rear seats folded you don’t get a flat load floor. 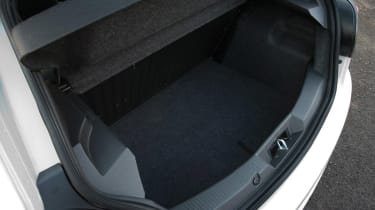 On the plus side, the 270-litre boot is identical to the five-door Audi A1 Sportback's and just eight litres smaller than the new MINI 5-door's. All MiTos, bar the most basic model, come with a space-saver spare wheel as standard.