Another financial fear among owners in the past was depreciation, with an Alfa often losing a large percentage of its initial price when it came time to sell. However, with experts expecting the Giulia saloon to match German rivals for retained value, there’s little reason to doubt that the Stelvio – a desirable and fashionable SUV – will do the same. 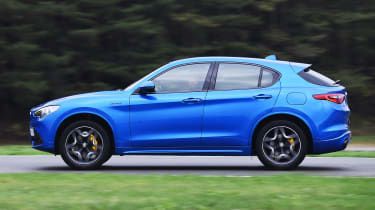 The 2.0-litre petrol will be more expensive to run, because with either 197bhp or 276bhp it manages around 29mpg and emits 219-222g/km of CO2. The high-powered Quadrifoglio claims an official fuel economy of 24.6mpg, which is similar to the Porsche Macan. CO2 emissions stand at a hefty 261g/km.All Stelvio models cost £150 a year to tax after their first year’s CO2-weighted payment (which is usually rolled into the on-the-road price). Most models now tip over the £40,000 mark and the Quadrifoglio definitely does; in those cases you’ll pay a surcharge of £325, bringing your total yearly tax bill to £475. This surcharge is payable for five years from the first time you tax the car after a year of ownership.

The Stelvio is relatively pricey to insure, with the 187bhp diesel in Super trim sitting in group 30 out of 50. The entry-level petrol gets the same classification, while the 276bhp Milano Edizione sits in group 36. Unsurprisingly, the Quadrifoglio sits in the very top group.

Alfa Romeo cars require yearly servicing, and servicing packages are available. Your dealer should be able to advise you on a service package that matches your annual mileage.

The Stelvio has five years' warranty cover, made up of 24 months from the manufacturer and then 36 months additional cover from Alfa Romeo’s UK operation. The 75,000-mile limit may seem a little restrictive, but equates to 15,000 miles a year, which is more than the average UK motorist will expect to cover. It’s worth noting that ex-demonstrators and fleet sales get a three-year warranty.