The Alfa Romeo Giulia showed us that the Italian company could compete with German saloon rivals in terms of driving fun – and the Stelvio does the same in the SUV class. The name conjures up images of winding Italian mountain roads, and the car feels very capable of taking them on. The SUV shares much of its mechanicals with the sporty Alfa Romeo Giulia saloon and the two feel quite similar to drive as a result.

The controls are among most responsive that we’ve experienced in an SUV; more so than the likes of the Volvo XC60 and Mercedes GLC. The electrically-assisted steering is very light indeed, yet its directness and accuracy turns this into a virtue. Unlike most cars of this type, the Stelvio shows barely a hint of body lean in fast corners, making it feel much lower than it actually is. Usually this would only be possible with very firm suspension, yet the ride remains mostly smooth and comfortable, if not quite as much as the Volvo and Mercedes.

Although the lack of a manual gearbox may disappoint some, it isn’t missed because the eight-speed automatic is so smooth and responsive. Left in automatic mode it provides seamless changes that you hardly notice, while manual mode gives you near-instantaneous control of gear changes when you need it.

Alfa Romeo has fitted its DNA drive mode system to the Stelvio, meaning you can adjust the car’s responses to your driving style. The car’s steering becomes weightier and the throttle and brakes become more sensitive to your inputs if you select Dynamic mode, while the car’s gearbox feels sharper too. Things are backed off in Natural Mode and focussed on economy in Advanced Efficiency mode.

The high-performance Quadrifoglio has a rear-biased four-wheel-drive system that only sends power to the front wheels when it senses the rear tyres are losing grip, meaning it feels more playful than you might expect of a four-wheel drive SUV. The car’s steering is sharp and accurate, making it feel surprisingly agile, even if the tall body and SUV heft make themselves known every now when you're really pushing hard. Nevertheless, the Stelvio is incredibly well balanced all things considered.

A Race mode on the Quadrifoglio’s DNA drive system loosens the car’s stability control, allowing the back to slide more than the four-wheel-drive system would ordinarily allow, but even in this setting the car never feels intimidating. An optional Akrapovic sports exhaust is now available as an option, should you wish to make the engine even louder. 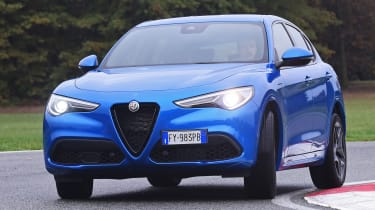 Of the four engines available in the Stelvio, the 2.2-litre diesel is our favourite, with 207bhp and lots of pulling power when you put your foot down at any speed. The 0-62mph sprint takes 6.6 seconds – impressive for a car that can return over 40mpg. It’s a slight shame that this is only offered on the top-spec Veloce, because we prefer it to the 187bhp version of the same engine. The 187bhp engine takes a second longer to hit 62mph from a standstill, and offers the same economy.

Although less powerful than the top petrol overall, the diesel doesn’t need to be worked as hard to get the best out of it. What’s more, it emits a sporty rumble, which may, or may not appeal to you. It gels well with the eight-speed automatic gearbox and can be relaxing or entertaining, depending on your mood.

The 2.0-litre petrol engine produces 276bhp in Veloce spec – more than the entry-level Porsche Macan 2.0-litre and enough for a 0-62mph sprint of just 5.7 seconds. In truth it never feels scintillatingly quick, but there’s a substantial feeling of acceleration whenever you plant your foot on the throttle, and overtaking is immediate and safe.

It can be a frustrating engine in some respects. It relies on an artificial sound generator to make up for what is an otherwise dull noise under acceleration, and because of strict emissions control equipment it won’t rev to the heights that you might expect of a turbocharged petrol engine. A 197bhp version of the same engine is also available in the three other trims, taking 7.2 seconds to get from 0-62mph.

The high-performance Quadrifoglio model has a 2.9-litre twin-turbo V6 engine that's also used in the Alfa Romeo Giulia Quadrifoglio. It develops 503bhp and can get the Stelvio from 0-62mph in 3.8 seconds.