Stelvio comes up a little short on ultimate space, but remains a useful package

If there’s one area in which the Alfa Romeo Stelvio doesn’t try too hard to compete, it's interior space and boot capacity. While the BMW X3, Audi Q5 and Mercedes GLC aim to be capable all-rounders, the Stelvio seems to align itself more with the Porsche Macan in this respect.

It’s not as practical as many of the cars in this class as a result, but it does allow four adults to travel in comfort and style. 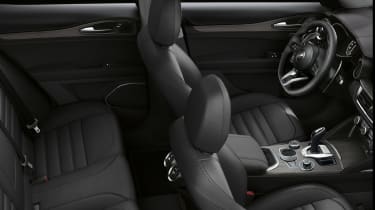 Space in the Stelvio is competitive but far from class-leading. A six-foot passenger can comfortably sit behind a similarly tall driver, but once seated the feeling is more of being cocooned than having room to stretch out.

This is exacerbated in the Quadrifoglio model if you go for the carbon-fibre bucket seats, as they eat further into legroom for passengers in the rear seats.

Boot space stands at 525 litres whichever model you choose, and the optional spare wheel only reduces this to 499 litres, while folding the rear seats frees up 1,600 litres of space. It’s actually a little more than the Porsche Macan, which promises 500 litres and 1,500 litres respectively. The tailgate opens to bumper height, too, so there’s no bulky sill over which to load cumbersome items.