"The skeletal Ariel Atom offers an driving experience akin to riding a motorcycle, especially if you go without the optional windscreen"

If there’s one word to describe the Ariel Atom, it’s probably ‘unique’. No other sports car has an exoskeleton you can see all the working parts through, offers a windscreen only as an optional extra and has an accessories catalogue that reads like a race team’s parts list.

It’s built in the UK, but the Atom is powered by the engine from the previous Honda Civic Type R: a 2.0-litre screamer with 245bhp, for a 0-62mph time of 3.1 seconds. Not fast enough? Ariel will add a supercharger to give you 310bhp, or fettle the engine even more to wrangle 350bhp from it. In a vehicle weighing around half as much as a Skoda Citigo, that’s enough power to make the Atom one of the fastest-accelerating cars on the planet.

The Atom is tuned for performance not fuel economy

Because the Atom's Honda engine has been tuned to produce more power, the car is only capable of 31mpg fuel economy and has CO2 emissions of 190g/km, so it'll cost £270 in annual road tax as long as it's registered before April 2017. As this car is designed to be used on a race track and offer maximum performance, running costs will be of little importance to Atom owners, although they won't be quite as high as you might expect, as the car is so light. Maintenance and running costs are also likely to be far lower than larger, heavier and more powerful supercars with similar performance.

One of the most exciting driver's cars in the world

The Atom's very light weight and generous power combine to create a very fast car. The 0-62mph sprint is demolished in around three seconds, which is similar to a high-performance motorcycle. Top speed is 145mph, but it's in the corners where the Atom excels, as it requires minimal steering inputs and offers masses of grip. If you want to get the best from the Atom, you really need to try it on a race track. It’s possible to make your Atom significantly faster, too, by increasing power from the standard 245bhp to 310 or even 350bhp with a supercharger and other factory performance parts, while also upgrading everything from the brakes, suspension and wheels to wings and spoilers, to literally turn the Atom into a racing car for the street.

Lack of doors, windows and roof make for a very windy ride

The Atom is not a comfortable car to travel in. The sudden power delivery, vicious acceleration and firm ride are best suited to smooth roads and race tracks rather than bumpy back lanes. Motorways are very disconcerting for both driver and passenger – we'd strongly recommend buying a pair of crash helmets to make life more comfortable, even if you go for the optional windscreen.

Suited to short weekend journeys, if it's not raining

The Atom is hard work to drive around town, as all of the controls are heavy. They're designed for withstanding repeated abuse on a racetrack, not for nipping down to the shops. The complete lack of a roof, windows, boot, glovebox, windscreen or heater makes even the simplest journeys a challenge.

Build quality is good, but there's no safety kit

The Ariel Atom uses an engine supplied by Honda, which is sure to be reliable. The rest of the car is hand-built and the attention to detail is second to none. As the Atom is made in small numbers, it doesn't need to meet EU crash-test regulations, so there are no airbags, anti-lock brakes or electronic stability control. Instead, the two seats come with race-style four-point harnesses to strap you and your passenger tightly in place.

It's expensive considering how little you get

The entry-level Atom costs about as much as a top-of-the-range Volkswagen Golf or BMW 3 Series, and is more expensive than the Caterham Seven – its only real rival. However, very few cars offer the Atom's level of performance, even £250,000 supercars. Optional extras include a detachable windscreen and carbon-fibre headlamp covers. 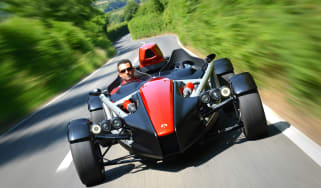