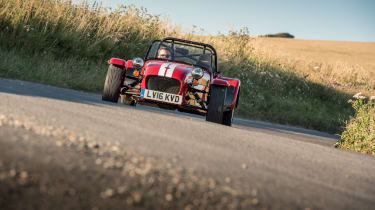 The Caterham Seven is quite unlike any other car on the market, although it has been imitated by countless replicas and downright copycats over the years. It’s the latest evolution of the original Lotus Seven sports car, a machine that wore Lotus founder Colin Chapman’s “simplify and add lightness” mantra on its sleeve.

Unlike other cars to have descended from a famous original, the Caterham Seven is in no way diluted from its original concept of providing the ultimate minimalist driving machine. The bodywork is merely a housing for the engine, driver and passenger, and safety is ranked far higher than comfort. It’s not a car that’ll suit everybody, then, but few can offer a more pure driving experience.

All models in the latest Caterham line-up follow the same formula, but with differing power outputs – choosing one is like deciding how many shots to have in your espresso. The entry level is the rather back-to-basics Seven 160, with its non-nonsense steel wheels. It only has a tiny 0.6-litre Suzuki engine and 80bhp, but it still manages a 0-62mph time of around seven seconds.

Although the Seven 160 shows that less can be more, the no-holds-barred 620R proves that power doesn’t always corrupt. It has 310bhp, can scorch from 0-62mph in around three seconds and will keep accelerating up to 155mph. Few cars – at any price – will keep up with the 620R on a racetrack. Perhaps the most charming model, though, is the retro-tinged Supersprint, with a thoroughly useable 95bhp and the vintage looks of a sixties racer.

For all but the most hardy of motorists, the almost total lack of creature comforts makes a Caterham a toy for high days and holidays. They’re not cheap, either. But once hooked on the Seven experience, few owners will trade for anything else.

How many 57.6mpg petrol cars can you name that’ll also do 0-62mph in around seven seconds? The light weight of the Caterham Seven 160 gives it an advantage against other sports cars that’s perhaps unexpected – low fuel consumption.

Because the engine only has to move the weight of itself, the driver and a bare minimum of excess fat, it doesn’t have to work very hard. Ultimately, it’s entirely up to the you whether to concentrate on saving fuel or burning it as rapidly as possible – exercise your right foot energetically and those figures will tumble. Caterham hasn’t actually released fuel-consumption figures for the rest of the range, but you can expect the car to be thrifty as you drive to the race track and thirsty when you get there.

Other running costs will be similarly affected by the amount of fun you have. Regular trackdays will accelerate brake wear and tyre scrub, so both may need regular replacement. Bear in mind, too, that the supercar-rivaling 620R and 620S models cost over £40,000 to buy and so are liable for £450-a-year in road tax for the first five years of ownership. Caterhams costing less than that amount attract a flat yearly VED rate of £140.

Car and driver work together in perfect harmony

Not everybody will enjoy the Caterham Seven driving experience. Where some sports cars indulge, the Caterham attacks. Driving a Seven is a full-body cardiovascular workout. To get the best out of one takes concentration, no small amount of effort through the steering and quick reactions to catch the resultant slide if too much power is applied. 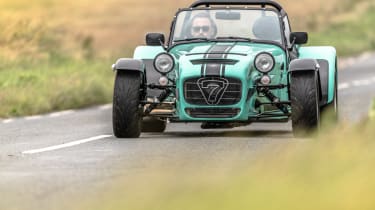 While not assisted, the steering isn’t heavy at pottering speeds, but its directly connected nature means that it’s constantly writhing in your hands – and the more effort you put in, the tighter a line the Seven will take through a corner. You turn a Caterham steering wheel as much with your shoulders as your wrists, so every part of your body feels involved in the driving experience, with a firm shove required on the brakes and the clutch.

Unashamed adrenaline junkies will love the 620R – its 2.9-second 0-60mph acceleration (Caterham quotes 0-60mph and not the industry-standard 0-62mph figure) is pulverising and made all the more surreal by not ceasing until you hit 155mph. Such performance makes this car near-unbeatable on track, but the more moderate Seven 270, 310, 360 and 420 models offer more than enough power for all but the most hardened thrillseeker.

For those of a less daring disposition, the 95bhp Supersprint offers a real taste of open-air motoring from a bygone age. Its turbocharged, three-cylinder, Suzuki-sourced engine is bang up-to-date, but emits an evocative exhaust rasp that speaks of a time before emissions control and speed cameras impinged on driving fun.

Top speed is just 100mph (where it's safe and legal to drive that fast), but low gearing brings the 0-62mph time under seven seconds and the Supersprint lives up to its name on tight country roads. You'll be changing gear frequently, but that's part of the fun thanks to a super-smooth five-speed manual gearbox, and narrower tyres make for an even more nimble – if less grippy – balance than more powerful Caterham creations.

The Caterham Seven doesn’t really have an interior to speak of, just somewhere you can sit to take the wheel, away from the oily bits and mechanical linkages. This really is minimalist motoring of the most extreme kind – two seats, dials to show you essentials like engine revs and speed and switches for the lights, indicators and wipers. However, in a car like this, what more do you need? 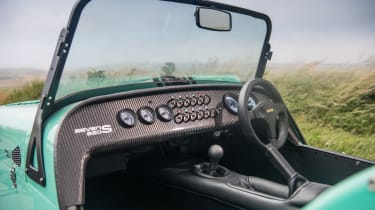 While the options list does offer a heater and a 12v socket, the absence of a stereo or infotainment system is to be applauded – it would only weigh you down in a car where even the carpets are optional. Buyers in the UK might be wise, though, to order the wet-weather kit – including vinyl doors to keep the worst of our weather out.

The 620S is the closest yet to a Caterham GT car, with suspension optimised for road comfort, a full windscreen and a set of leather seats. Yet, for all its stark simplicity, no Seven is actually an uncomfortable car. The race-style seats support in all the right places and the driving position has been honed to perfection throughout the model’s 60-year lineage. The suspension, too, is surprisingly supple. Because of the Seven’s featherweight nature, it doesn’t need to be firm to remain controlled, making for a remarkably smooth ride.

The sixties-inspired Supersprint was designed as much for style as driving fun, as its quilted, stitched Scottish leather seats and wood-rimmed steering wheel attest. A single seat keeps weight down so you can make the very most of its 95bhp, but you might prefer the two-seat version – an experience this much fun really should be shared.

Not only does the Caterham Seven offer among the purest drives possible, but it also allows you to take a passenger along to share the experience. You can even buy some models with a wider, more spacious SV body. That, however, is where the Seven’s versatility ends. 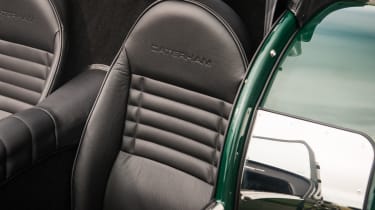 Right at the back of the car, there’s some space behind the rear seats, and you could call this your luggage area. However, it also has to house the Seven’s wet-weather gear when it’s not in use and lifting items in and out is made awkward by the roll bar mounted above it. It’s enough space, though, to carry a pair of race helmets and driving shoes if you’re on your way to a trackday.

The engineering is simple, but safety relies on the skill of the driver

The reliability of a Caterham Seven is difficult to predict. With engines provided by Suzuki and Ford, the engineering credentials aren’t in doubt. Build quality is also very impressive – although it should be noted that you can buy a Caterham in kit or partially completed form for DIY assembly, so the final finish may depend on the competence of its builder.

While the individual components may be sound enough, the reliability of a Seven will often depend on how it’s treated. If you’re sympathetic and maintain it stringently, we foresee no major difficulties. If fun-seeking motorists overlook the dull chores of maintenance, though, faults could set in.

When it comes to safety, like other limited-production sports cars, the Caterham Seven isn’t subjected to quite the same legislation as other road cars – you’ll find no airbags, side-impact beams or even a tyre-pressure warning system. You will find huge grip and exceptional brakes, though, as well as a car that’s incredibly controllable, so mishaps are easily avoided.

There are other sports cars, but there’s only one Caterham

The market isn’t short of two-seater, track-orientated sports cars. The Lotus Elise is the most famous and comes closest to matching the Caterham’s single-minded nature There are also specialised expensive machines like the Ariel Atom, KTM X-Bow and Radical SR3.

All of these, though, were designed to beat the Caterham Seven at its own game, and while they might offer better aerodynamics and, sometimes, a fractionally better circuit lap time, they don’t offer an improved driving experience – just a different one.

What’s more, the Seven’s options list, with its roll cages, suspension and brake upgrades, carbon-fibre components and fire-extinguisher system, allows experienced drivers to build their Seven up to near race-car standards. For many, there will never be an equal. 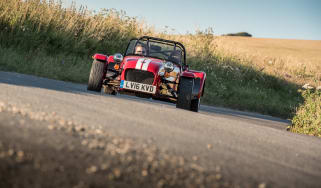 This is our round-up of the the best drivers’ cars on sale today.
Top 3 serious British sports cars for £18,000: TVR Griffith, Lotus Elise, Caterham Seven 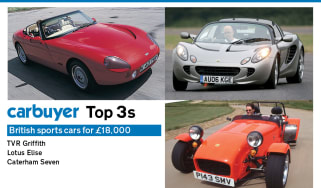 "Dear Carbuyer, I want a simple, traditional British sports car. What will £18,000 buy me?"
Skip to ContentSkip to Footer