"Dear Carbuyer, I want a simple, traditional British sports car. What will £18,000 buy me?" 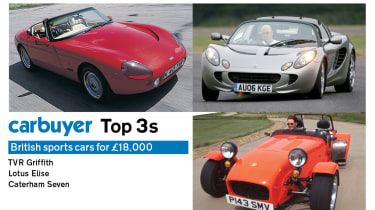 The term "sports car" has become rather elastic in recent years, and is used to describe an extremely broad range of fast convertibles and coupes. The Porsche 718 Boxster, Audi TT and Mercedes SLC are prime examples of popular sports cars, with cars like the Audi R8 and Porsche 911 blurring the boundaries between sports car and supercar.

Time was, though, when sports cars were rather more simple and focused than they are today, with hi-tech features and creature comforts sacrificed in favour of light weight and perfect balance. While some cars, such as the Alpine A110, still offer that formula today, the 'original' sports-car experience is generally the preserve of a few well known and long-established models. Fortunately, though, you can pick one up for less than you think. 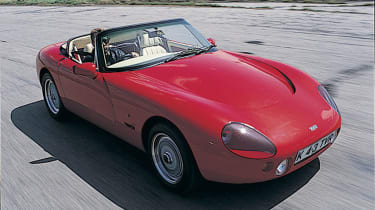 Currently in the throes of a comeback, TVR is a beloved name from Britain's motoring past. Originally based in Yorkshire, the brand once specialised in light, simple sports cars based on over-the-counter components, but its offerings became increasingly sophisticated over the years. The Griffith of the 1990s is one of its most celebrated models, combining a pretty, curvaceous body with brawny V8 engine – and a serious turn of speed. A rock-hard ride and fiddly convertible roof mean it isn't the easiest car to live with every day, though. 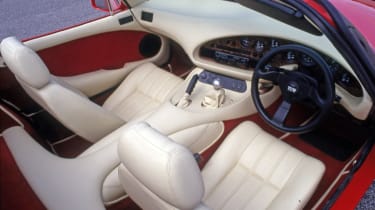 The Griffith is a sought-after car: you'll find the odd example for £18,000, but may have to settle for the 4.0 or 4.3-litre version rather than the awesome 5.0-litre 500. That's no real hardship, though; you'll still get the same blend of blistering pace and an unforgettable soundtrack. Beware of tricky handling at the limit, though; this is a car that needs determined concentration when driving enthusiastically. Condition is all when buying a Griffith – be particularly wary of corroded chassis members and cracks in the glassfibre bodyshell. 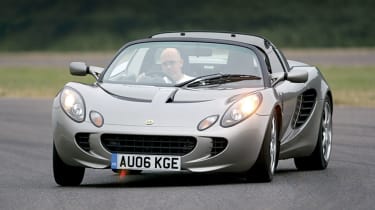 The Lotus Elise does things distinctly differently to the TVR Griffith and proves that you don't need atomic levels of power to go quickly if weight and balance are optimised. As a result, its relatively small 1.8-litre engine is enough to go very fast indeed, without much risk of too much power corrupting the car's grip on the road. That allows for a very special driving experience; the Elise is one of the most fun cars to drive conceived so far. 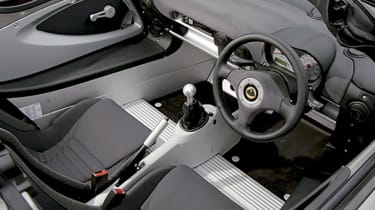 The second-generation model has been around since 2001, but still looks bang up-to-date. Later, Toyota-powered cars are the most reliable, and the 189bhp 111R offers all the power most will need, while fitting our £18,000 budget. The Elise is rather more focused and minimalist than even the TVR, so you'll struggle to find luggage space for much more than a wallet and toothbrush, but supportive seats and a smooth ride make travel surprisingly comfortable. Evidence of regular maintenance is more important than age or mileage, but be wary of trackday crash damage. 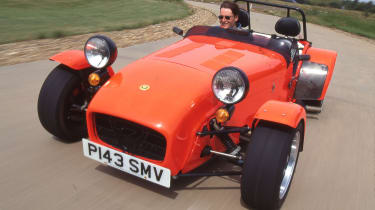 For: Lots of choice, unlikely to depreciateAgainst: One dimensional and very cramped

If the Lotus Elise seems like an extreme sports car, the Caterham Seven takes things to the next level. The fact that the former was intended to be a 'more civilised' successor to the latter gives you a clear idea of exactly what the Seven is all about. With a simple aluminium frame, unfared wheels and an open, exposed cockpit, the Caterham Seven barely has any more bodywork than is required to carry its engine and gearbox. There's absolutely no unnecessary weight, and the driving experience is about as pure as you'll find. It's the perfect trackday companion, regardless of your level of driving experience. 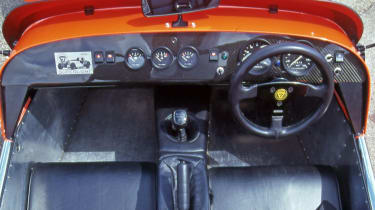 Such a pared-down machine won't appeal to everybody – weather protection is scant and luggage space virtually non-existent. Don't dismiss the less powerful variants: although our £18,000 budget will secure a 140bhp Supersport, you're likely to find entry-level models can put just as big a grin on your face. As with the Elise, condition is more important than age or mileage – the Seven's uncompromising nature means mileage is likely to be fairly low on most examples. However, a lifetime of hard use on track can result in worn suspension, squeaky brakes and scuffed bodywork. Anything less than instant response on a test drive could point towards tired mechanical components.