Looking for the ultimate weekend toy but you’re on a budget? Check out our top new and used picks for affordable sports cars

Buying a cheap sports car in the UK used to be an easy affair. With brands such as Triumph,  MG and Austin-Healey populating our roads with small, nimble roasters, there were seemingly endless choices on offer.

However, while our appetite for speed hasn’t gone away, the way we experience it has. Sales of made-for-purpose sports cars have declined, with many buyers finding it difficult to fit such an impractical vehicle into their lives. This has led many to opt instead for hot hatchbacks and performance SUVs. Models such as the Hyundai i20N and Ford Puma ST still fit the description of a small, inexpensive performance car, yet their added seats and usable boots allow for much greater practicality and flexibility day-to-day. 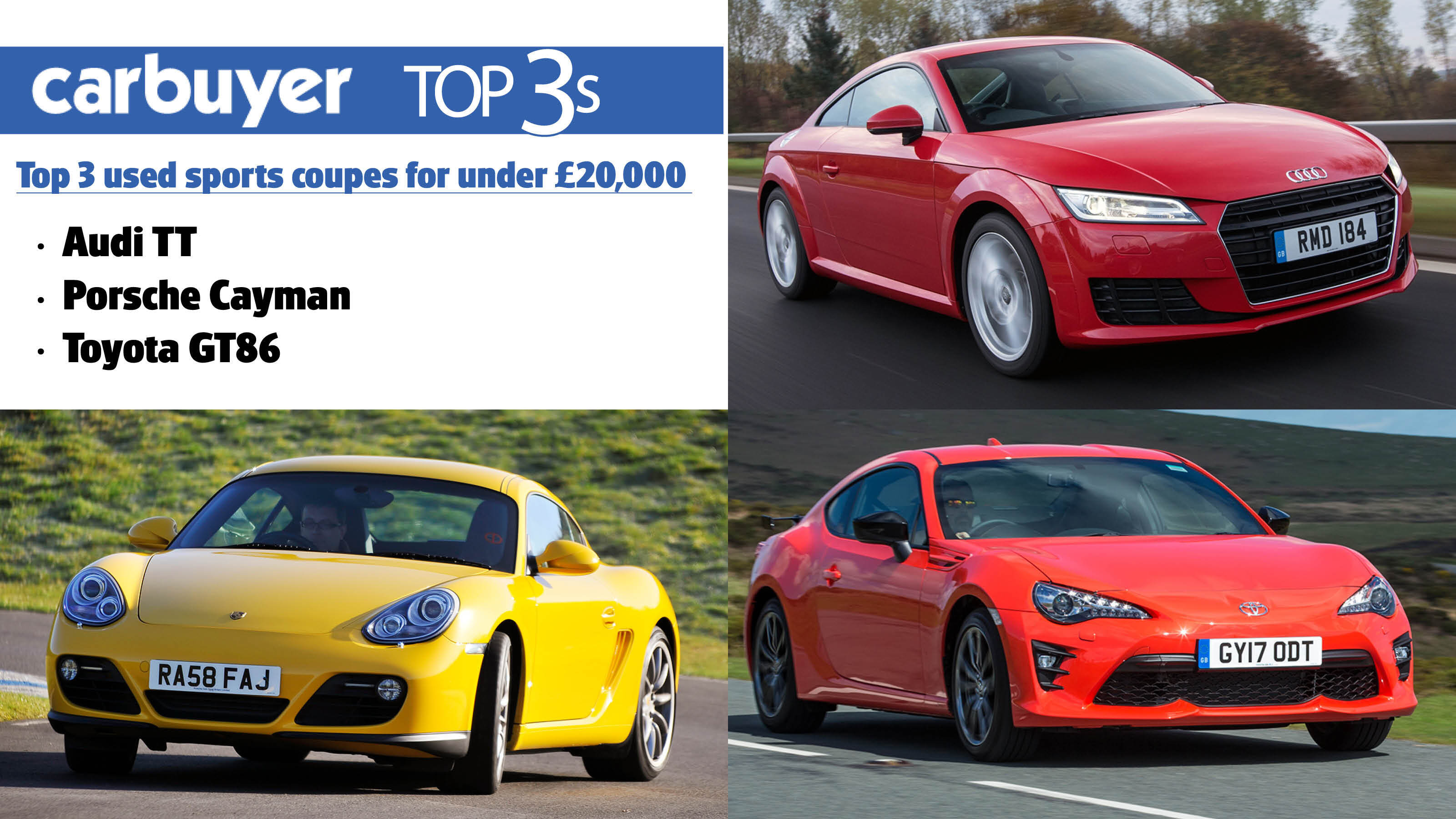 Nevertheless, there remain some of us who are willing to forego such bugbears just to have that true sports car experience and thankfully, some budget-friendly options are still available. We have compiled those models into a list of five great value sports cars that you can buy new now, as well as a handful of once-more-expensive or discontinued models that you can find for a steal on the used market.

Read on to see our picks.

The world’s best-selling roadster is now in its fourth generation and shows no signs of middle-aged spread. The simple and lightweight Mazda MX-5 is as much fun as it ever was. Just like the original back in 1989, there isn’t a huge amount of power, but the chassis makes the most of what there is. The MX-5 provides plenty of feedback through the steering wheel and the manual gearbox is one of the best in the business.

The standard car has a manually-operated fabric roof, although the folding-hardtop MX-5 RF is also available. Entry-level MX-5s start from around £25,000 and feature a 1.5-litre 130bhp engine which covers the 0-62mph sprint in a respectable 8.3 seconds. Higher-end models get a more-powerful 2.0-litre engine with 181bhp. This shortens the 0-62mph time to just 6.5 seconds and upgraded Bilstein suspension makes the MX-5 handle even sweeter.

In recent years, it may seem that BMW have turned their focus to building the best luxury cars rather than the ‘ultimate driving machine’. Thankfully, the latest 2 Series is exactly what enthusiasts have been asking for: a small, relatively affordable coupe with the same level of dynamics and luxury that we’ve come to expect of BMWs. The 2 comes highly-equipped with the brand’s full iDrive infotainment system as standard; plus, the sizable 390-litre boot means that it’s not confined to solely being a weekend car.

The majority of 2 Series Coupe models are rear-wheel-drive; except for the range-topping 374bhp M240i which uses BMW’s slick rear-biased xDrive four-wheel-drive system. The base model is the £35,000 220i which uses a 2.0-litre four cylinder engine with 181bhp; this should be good for 0-62mph in 7.5 seconds. While a 190bhp 2.0-litre diesel is also available, it isn’t really befitting of the 2 Series’ sporty character.

The Audi TT has been a hit since its launch in 1998. Its unique, curvy silhouette has become iconic and many have fallen in love with its fine blend of sportiness and livability. Now in its third generation, the TT is available in two body styles: a hard-top coupe or a soft-top roadster. Both feature a minimalist, driver-focused interior and Audi’s brilliant Virtual Cockpit instrument cluster. Other highlights include the figure-hugging leather sports seats and how the climate controls are niftily integrated into the air vents.

As well as a choice of body styles, the TT can be specified with a variety of engines and power outputs. Entry-level cars are front-wheel-drive and use a 2.0-litre turbo petrol engine which produces either 194 or 242bhp. More-powerful TTS and TTRS models are also available with sportier styling and quattro all-wheel-drive; the latter offering performance comparable to that of the original R8 supercar. Whichever model you choose, the TT is still great fun to drive, if a bit less engaging than some of its other sports car rivals.

A Toyota Yaris on a list of the best sports cars? If you’re surprised at that, let us tell you more about the GR Yaris. Those two little letters show that this is a car developed by Toyota’s rally team, Gazoo Racing. It may bear the Yaris moniker but this is no ordinary supermini; it has completely unique bodywork, gaping air intakes and super-wide arches.

The engine is a firecracker, with 257bhp squeezed out of a three-cylinder petrol. Add in four-wheel drive and the GR Yaris can hit 0-62mph in 5.5 seconds, making it one of the quickest cars on this list. A Circuit Pack is optional but enthusiasts will be keen on the locking differentials, lightweight alloy wheels and stiffer setup that it brings.

For the car enthusiast that only wants to drive for the sheer fun of it, the Caterham Seven provides perhaps one of the most engaging and visceral driving experiences you can buy. Essentially a lightly-modernised version of the Lotus Seven sports car of the 1950s and ‘60s, the Caterham is about as lightweight and basic as you can get with no radio or air conditioning and doors being an optional extra.

Entry-level Seven 170 models use a tiny 660cc Suzuki engine with just 84bhp. While this may not sound like a lot, the Caterham only weighs 440kg – less than half a Ford Fiesta. This allows for a surprisingly brisk 0-62mph time of just 6.9 seconds. Entry-level cars start from around £23,000, but you’ll need plenty of tools as you have to build it yourself. Factor in another £2,500 for a factory build and you’ll have some of the most fun you could ever have behind the wheel.

The Toyota GT86 marked a welcome return for the small, affordable and fun coupe; a combination not seen from Toyota since the Celica was discontinued. With a long bonnet and a low-slung body, the Toyota GT86 looks like a sports car, and feels like one the moment you climb inside. But it’s when you drive away that the magic happens. The steering, suspension and brilliant rear-wheel-drive chassis combine to deliver a totally immersive driving experience. So much, in fact, that you won’t give the relative lack of power a second thought.

Toyota has now discontinued the GT86 after nearly a decade on sale but if you want something new, you won’t have to wait long for its replacement. The more powerful Toyota GR86 is due to launch by the end of Spring 2022.

While BMW has since replaced this generation of 2 Series Coupe with a new model, the F22 2 Series is still a great sports car. Range-topping M240i models can now be found for around £25,000 and this gets you a lot of car for your hard-earned cash. These examples feature a muscular 3.0-litre six cylinder petrol engine with 335bhp. This can propel the 2 Series from 0-62mph in just 4.6 seconds and is available with either a six-speed manual or double-clutch automatic transmission.

The inside is perhaps where the new car has improved the most. Though there is nothing overtly wrong about the F22’s cabin thanks to high material quality, the design itself is a tad conservative and functional compared to what you may expect of a sports car. Thankfully, even older versions of BMW's iDrive infotainment system still feel slick and modern; plus the rear seats, while cramped, are a much welcomed addition for those with small children.

If you ever wondered what an Italian take on the Mazda MX-5 would be like, look no further than the Abarth 124 Spider. The Abarth is based on the Fiat 124 Spider which, in turn, is based on the Mazda MX-5. Here, the Turin-based tuning company has given its tamer Fiat sibling a more aggressive bodykit, firmer suspension, a rortier ‘Record Monza’ exhaust and an uprated 1.4-litre engine which now produces 168bhp – 38bhp more than the equivalent 1.5-litre MX-5.

On the inside, the Abarth is virtually a carbon-copy of the Mazda, with only a smattering of ‘Abarth’ badges to differentiate the two. However, unlike the Mazda, the Abarth is only available with a manual soft-top which may deter some buyers in colder climates. Poor sales compared to the MX-5 means the 124’s life was short-lived; yet you can experience one for yourself for just under £20,000 on the used market.

Despite being sold for over 50 years, it was only in 2015 that Ford decided to officially bring the legendary Mustang here to the UK. The sixth-generation ‘pony car’ is unlike the archaic models of old and features fully-independent rear suspension, a touchscreen infotainment system and even a (now discontinued) model with a fuel-sipping Ecoboost four-cylinder powertrain.

Perhaps most importantly, the Mustang is one of the cheapest ways into a modern V8 sports car. The Mustang in ‘GT’ guise produces a monstrous 444bhp from its 5.0-litre V8 motor and boasts the same deep, rumbling sounds you want and expect from a muscle car. The Mustang is a slice of Americana that may be deemed unsophisticated by some – but our advice is not to knock it until you try it!

There are few more exciting hot hatches than the Honda Civic Type R, and it’s quite good value when you realise it costs about the same as a Ford Focus ST but packs almost 50bhp more. With just two driven wheels instead of four, the Civic Type R can’t match the fast Audi and Mercedes hatches off the line but it’s still seriously rapid. It’s in corners where the Civic Type R impresses, though, and it also rides better than the previous model.

The styling is like something out of a Japanese comic but more understated Sport Line models are available if you find the big wings and outlandish styling of the standard model a little over the top. Just like the regular Civic, the Type R has a big boot and a well-built interior.

Looking for a cut-price convertible? Check out our list of the top 10 best used convertibles

Next Audi TT will be a four-door electric coupe