"The Mazda MX-5 RF has a retractable metal roof instead of the standard model's fabric version, adding an extra dose of style and refinement to an already impressive package"

The Mazda MX-5 RF offers buyers the option of having a targa topped version of the world’s best selling sports car. The RF is a cross between the standard convertible MX-5 and a fixed-roof coupe, the key advantages over soft-top car being greater refinement and sleek coupe looks with the roof closed. RF stands for ‘Retractable Fastback’, referencing that power-folding hardtop arrangement.

You can raise or lower the Mazda MX-5 RF’s roof on the move too, as long as you’re driving at speeds less than 6mph. Some will prefer pressing a button to pulling the roof back manually, which is what drivers will be doing in fabric roofed MX-5s. The RF affords better protection from the elements and improved sound insulation making for a more relaxed drive, something that will be appreciated by owners who do a lot of long journeys and motorway miles.

Having a hard-top roof has a slight impact on the MX-5’s straight-line speed but thankfully, the RF is just as much fun and as rewarding to drive on a twisty road as the soft-top. A light facelift has brought upgrades in performance, with the 2.0-litre version gaining another 23bhp along with a higher rev limit to 7,500rpm for even more thrills.

The hard-top roof doesn’t affect the car’s practicality and both of the trim levels available include plenty of standard equipment. For an extra dash of luxury, there’s also the limited-run Sport Black model, with extras like gloss-black exterior trim, Eternal Blue Mica paint and neat touches inside.

There are hatchbacks on the market with more power than the MX-5, but few have its handling characteristics. The Fiat 124 Spider was its closest rival, using the MX-5’s underpinnings together with Fiat’s own engines, until that car was discontinued in the UK in mid-2019.

Whether you decide to spend the extra £1,900 on the RF over the standard MX-5 is likely to depend on which body shape you prefer and how often you plan to drive the car with the roof up. If the RF is the version you decide to go for, we’d recommend spending extra to get the bigger, 181bhp 2.0-litre engine, as the extra power over the 130bhp 1.5-litre helps compensate for the roof’s extra weight.

The MX-5 RF, along with the standard MX-5, was updated in early 2020. A range-topping trim level called the GT Sport Tech was added and all models in the range were fitted with new fuel-saving technology.

The Mazda MX-5 RF is available with either a 1.5 or 2.0-litre petrol engine. The smaller engine is the more efficient, claiming official economy of 44.8mpg and emitting 143g/km of CO2.

Mazda added its ‘i-ELOOP’ technology to both engines at the start of 2020. This new technology includes a new stop-start function and energy recovery system, which improve the car’s effiency.

Efficiency drops if you go for the larger, more powerful engine. The 2.0-litre petrol returns 40.9mpg and has CO2 emissions of 156g/km for an affordable Benefit-in-Kind (BiK) band for company-car drivers. 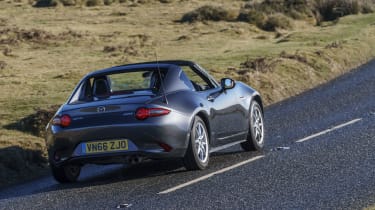 Insurance groups for the RF are similar to those for the soft-top MX-5, with ratings ranging from group 25 to 29 depending on the exact engine and trim combination. Mazda offers the MX-5 RF with a three-year/60,000-mile warranty and fixed-price servicing packages are available.

Fitting a hard-top roof to the MX-5 has added around 45kg to the car’s weight, but while that has increased 0-62mph times by around three tenths of a second, the MX-5 RF feels as responsive, nimble and fun as the standard soft-top.

The 1.5-litre petrol model produces 130bhp and will do 0-62mph in 8.7 seconds, which is four tenths of a second slower than the soft-top with the same engine. The 2.0-litre engine produces 181bhp and will do 0-62mph 6.8 seconds, three tenths down on the soft-top equivalent. These figures are indicative of how the engines feel in the hard-top; the bigger engine is better suited to the RF, because it’s less affected by the extra weight of the roof. The 1.5-litre model needs to be worked harder, with overtakes on steep hills requiring more forethought. The RF is a fun car with either engine, but it’s worth spending a bit more to get the 2.0-litre model. 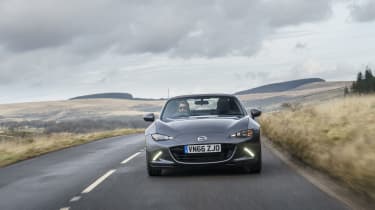 There's also the option of a six-speed automatic gearbox for the 2.0-litre engine that costs £1,600. Considering that the car is aimed squarely at driving enthusiasts, it seems unlikely many buyers will want it over the slick-changing six-speed manual, especially as it also extends the 0-62mph time by over a second, to 7.9 seconds.

The real appeal of the MX-5 is how it performs in corners and the rear-wheel-drive layout and excellent handling characteristics remain intact in the RF version. Mazda has tweaked the steering and stiffened the suspension, but the RF remains relatively soft and comfortable for a sports car. On a winding B-road, the car is agile and engaging – there’s little that comes close for the same money. Improvements to the 2.0-litre that added 23bhp for the 2018 facelift make it even more thrilling, particularly as the revs climb towards its higher 7,500rpm red line. It also gives the MX-5 a distinct appeal when compared with turbocharged models like the Abarth 124 Spider and Audi TT Roadster.

The interior of the RF is the same as the standard MX-5’s, which is no bad thing. Previous generations of the car were criticised for poor-quality materials and this has now been addressed. What’s more, Mazda has placed an emphasis on refinement with the RF, meaning there’s an optional leather finish for the dash, giving the interior a really upmarket feel. The seven-inch touchscreen infotainment system now features sat nav, Apple CarPlay and Android Auto. It has been tried and tested in other Mazda models and is easy to use. 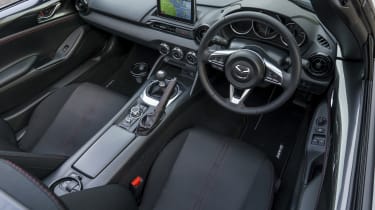 With the roof up, the MX-5 RF is no roomier than the standard car, meaning taller drivers are likely to feel cramped and the driving position feels a little awkward. Happily, the facelift introduced a telescopic steering column that can be adjusted for reach, which should make it possible for more people to find a comfortable driving position.

A solid hard-top roof means the cabin of the RF is much quieter and more peaceful for occupants when it’s up. Ironically, however, the RF’s rear buttresses make it noticeably noisier when the roof is down. There’s plenty of turbulence noticeable in the cabin at higher speeds and any conversations between driver and passenger will require raised voices as a result.

As a small, relatively lightweight sports car, the MX-5 doesn’t really offer practicality; it was designed for driving thrills rather than everyday routine. There are no doorbins and no glovebox, with only a small, lockable cubby space between the two front seats offering anywhere to stow your odds and ends.

The boot is small, too, at 130 litres, but it’s at least a good shape, meaning it’ll swallow a few soft bags for a weekend away. 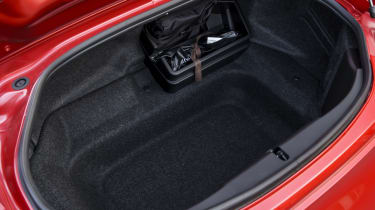 The hard-top roof makes the MX-5 RF better suited to long motorway journeys compared to the standard soft-top version, as the interior is more peaceful and relaxing with the roof up.

Mazda’s reputation for reliability is superb, and the MX-5 is a model that has always demonstrated this. In our 2019 Driver Power owner satisfaction survey, it came 22nd out of 75 cars rated. Even better news came for the Mazda brand itself, where it rose from 13th to fourth place in this year’s Driver Power brand survey. Owners have told us they love Mazda’s styling, quiet, smooth engines and well engineered gearboxes. Praise was also forthcoming for the the car’s well-built and comfortable interiors, concise infotainment systems, brilliant driving dynamics and low servicing bills. The only real reservation for MX-5 owners seems to be that they would like their cars to have better practicality.

If you want the safety kit like the lane-departure warning system, you have to choose the more expensive Sport Nav trim. This also allows you to spec the safety pack, which includes auto-dipping headlights and blind-spot monitoring with rear cross-traffic alert for £400.

The standard MX-5 is an excellent car but the RF has been made more attractive by a price drop that means it’s around £2,000 more expensive rather than £4,000. Whether it’s worth it will largely come down to preference and how you plan to use the car; if you want to drive on the motorway regularly, you may well appreciate the extra refinement of the hard-top. There’s no doubt the RF body shape and automatic folding roof do add something extra to the MX-5 in terms of style and drama.

The £28,395 Sport Tech and the £29,895 GT Sport Tech variants have even more creature comforts and offer a sportier drive, thanks to a limited slip differential and Bilstein dampers. These trims come with the 2.0-litre engine, which is our preferred unit in the RF. It’s only with this engine and that you can select an optional six-speed automatic gearbox for £1,600. 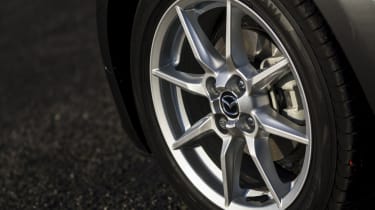 The options list was shortened after the range was updated early in 2020. There are, however, a range of metallic, pearlised or pearlescent paint colours at £550 each.

Customers can also add Mazda’s Premium Connected Services for the sat nav. This provides live traffic, weather, local fuel prices and local search information. It’s initially free for 60 days but it’ll need to be upgraded to a one year subscription for £75, or to three years for £115.

The RF is the only MX-5 bodystyle that can be specified with an optional £1,600, six-speed automatic gearbox. It can only be had with the 2.0-litre engine. 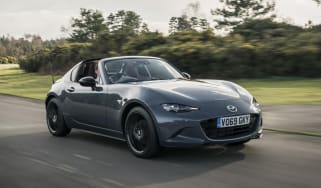 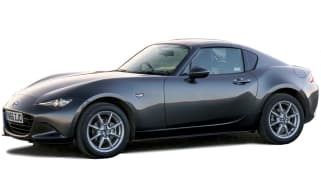 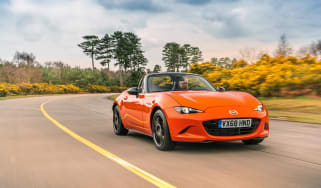 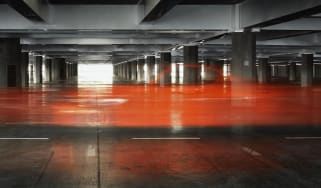 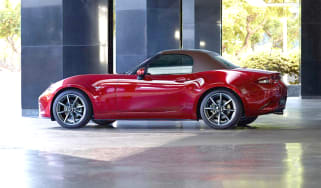 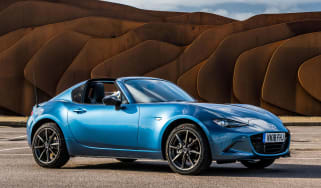 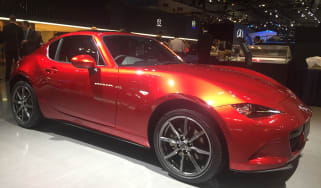