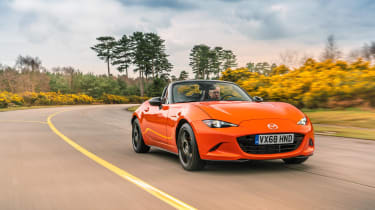 The Mazda MX-5 30th Anniversary edition is now on sale in the UK. Only 3,000 will be produced and the UK is getting 550 of the special-edition models. The convertible costs £28,095 and the RF coupe costs £29,895, with both getting plenty of attractive upgrades over the standard car.

Over 130,000 MX-5s have been sold in the UK since it was first introduced in 1989, meaning the UK is one of the biggest markets for the car. Because of its popularity here, around 1 in 6 of the MX-5 30th Anniversary models will come to our shores. Of the 550 cars earmarked for the UK, 180 will be the Mazda MX-5 RF coupe and 370 will be standard convertibles. Each one will get a numbered plaque to highlight its limited-edition status. 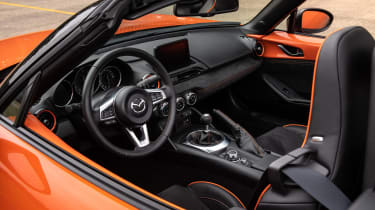 You’re treated to a few additions once inside, too. Much of the interior is trimmed in suede-like Alcantara fabric, and you’ll sit on supportive Recaro seats. There are orange accents throughout, and the 30th Anniversary Edition impresses on the equipment front - a nine-speaker Bose sound system, Apple CarPlay and Android Auto are all included as standard.

As with most special-edition MX-5 models, there’s no increase in power, but the 181bhp 2.0-litre petrol engine is good for 0-62mph in 6.5 seconds and a top speed of 136mph - managing around 40mpg during driving.

Celebrating three decades since it was originally launched, the Mazda MX-5 30th Anniversary Edition is likely to be popular with collectors. Mazda revealed the car at the 2019 Chicago Motor Show, the place where the original MX-5 was launched in 1989.

Read our review of the standard Mazda MX-5, then see where it ranks on our list of best sports cars.