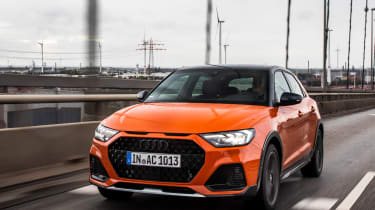 Selling cars is all about spotting and exploiting trends, and right now buyers are choosing SUVs and crossovers over more traditional family cars. The Audi A1 Citycarver is intended to fill a small gap in Audi’s current line-up by existing as a halfway house between the Audi A1 Sportback supermini and the Audi Q2 crossover. In doing so it goes up against capable rivals, including the Citroen C3 Aircross and Ford Fiesta Active, along with slightly larger crossovers like the Nissan Juke and Renault Captur.

Inspired by the Q range, the A1 Citycarver is around four centimetres taller than the standard A1 Sportback, mainly thanks to its raised suspension and chunky wheels and tyres. It also gets a new grille and black wheelarch mouldings and side-skirts, while silver bumper inserts mimic the look of metal skid plates.

While there’s no four-wheel drive model or genuine off-road ability, the changes should at least help put your mind at ease while parking on a raised kerb or driving through a small ford. Two petrol engines are available; a 1.0-litre badged 30 TFSI with 113bhp and a 148bhp 35 TFSI. There are more powerful 2.0-litre engines in use in other Audi models but none have been confirmed for the Citycarver as yet.

On the move, the taller suspension and plump tyres offer a cushioned ride that easily deals with speed humps and potholes without compromising the Citycarver’s handling. Body lean is still minimal, and while there's not a lot of feedback through the steering wheel, the pumped-up A1 an be driven precisely and with plenty of confidence.

We're still awaiting full specifications but the anticipated bestseller, the 30 TFSI, can return 43.5mpg if you drive carefully. CO2 emissions of 117g/km mean the Citycarver will be a cheap, if slightly unlikely, model for company-car drivers thanks to low Benefit-in-Kind taxation. 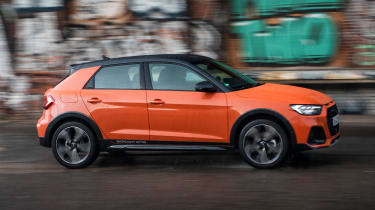 A larger 1.5-litre petrol engine will be available as the 35 TFSI in due course and will be fitted with fuel-saving measures like cylinder deactivation, which should help it achieve fuel economy of around 40mpg.

More reviews for A1 Citycarver hatchback

Road tax for every Citycarver costs £145 a year. Buyers responding to our Driver Power survey commented that Audi servicing is on the expensive side.

Even the 30 TFSI model has zesty performance, thanks to the car's small size

Petrol engines are the sole offering for the Citycarver at launch, with the 1.0-litre three-cylinder turbo kicking off the range. With 113bhp, this engine has already proved itself capable in bigger cars like the Volkswagen Golf, and here it gets the Citycarver from 0-62mph in a respectable 9.9 seconds. It can be chosen with a six-speed manual gearbox or optional seven-speed automatic. We never wished for more power during our test and even on the motorway the 1.0-litre was willing and hushed. 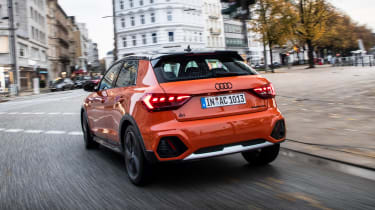 If you're after more power, the 35 TFSI has a 1.5-litre turbo four-cylinder making 148bhp. It has the same gearbox choices and front-wheel drive, but cuts the 0-62mph dash to 8.2 seconds.

The Citycarver is around 40mm taller than the standard A1, and 35mm of that comes from the raised suspension, with the rest courtesy of higher profile tyres. It gives the new model a more cushioned feel while attacking pockmarked roads, but don't expect lots of slack in the handling as a result. The Citycarver can be pointed through corners as convincingly as its name suggests, even if the steering isn't exactly bursting with feel.

With a tech-filled interior, the A1 Citycarver is one of the most advanced cars in its class, but it's not cheap and the interior isn't perfect. The main issue is some cheap looking materials lower in the car's interior, but luckily the slick infotainment screens do a good job of distracting you. 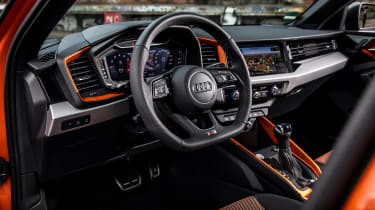 The Citycarver is equivalent to the standard A1 in Sport trim but costs around £1,400 extra and gets 17-inch alloy wheels, LED headlights, a sporty steering wheel and bolstered fabric seats. You also get a 10.25-inch digital instrument cluster, while the central infotainment display is 8.8-inches in diameter. There are nine paint colours available to order, all of which can be contrasted against a black or grey roof.

For one of the least expensive and smallest cars in Audi's range, there's lots of convenience features, such as rear parking sensors and cruise control, while optional extras include 18-inch alloy wheels, adjustable suspension dampers and painted red brake calipers. Audi's Technology Pack adds sat-nav, wireless smartphone charging and larger Virtual Cockpit instruments but it's pricey at £1,700. A Plus Pack adds privacy glass and dual-zone climate control for £700, while a Comfort and Sound Pack (£1,100) sees a Bang and Olufsen stereo, heated seats and parking aids fitted.

Practicality inside is largely unchanged from the standard A1 but, as mentioned already, its extra ground clearance could come in handy around town. With front-wheel drive, however, the Citycarver is just as likely to get stuck as the regular car if you get too adventurous. 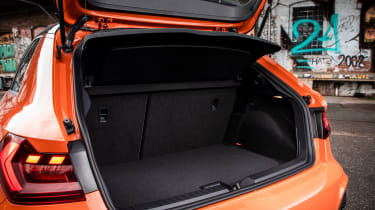 There's plenty of room in the front seats and the view out is ever so slightly better thanks to the increased height. Room in the back is acceptable too, with just enough space for adults. The boot measures the same 335 litres as the supermini, which is some way off the 410 litres of the Citroen C3 Aircross and even further behind the likes of the Renault Captur.

The Audi A1 Citycarver comes packed with safety features

Take a look at the A1 Citycarver's safety roster and you'd never guess it was one of the smallest and cheapest cars in Audi's range. Standard features include active technology that constantly monitors the road ahead for traffic, pedestrians and cyclists, warning the driver if they're too close and even braking automatically if necessary. Euro NCAP has already given the Audi A1 Sportback a five-star safety rating and because the Citycarver shares the same underpinnings and safety features, we doubt it will be tested separately. 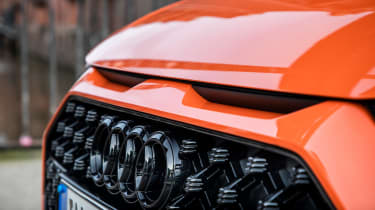 The latest Audi A1 was too new to feature in our 2019 Driver Power survey, but Audi itself came a middling 16th out of 30 manufacturers. Hopefully it'll carry on the mantle of the previous A1, with just 7.1% of owners telling us they reported a first-year fault in our 2018 results.