Step inside the A7 and you’ll be greeted by a simple and uncluttered dashboard with remarkably few buttons, thanks to an abundance of digital screens. The seats are low-slung and refinement on the move is excellent. Even with air suspension fitted, versions with large alloy wheels can still feel a little unsettled on rough roads, but models with comfort suspension and smaller wheels should be better.

With a minimal design characterised by geometric shapes and almost no buttons, the A7’s dashboard is quite a departure from the outgoing model. In fact, it shares more with the latest Audi A8, including its latest MMI infotainment system. This employs upper and lower central screens that use ‘black panel’ technology for improved contrast and a stealth appearance when turned off - so they blend into the surrounding surfaces.

Unlike the flat, linear dashboard of the A8, the A7's centre console is angled towards the driver and a wide centre console separates the front passengers. The upper screen is surrounded by a thick metallic ‘clasp’, that’s reminiscent of Audi’s family grille and adds to the interior jewellery. The same can’t be said for the upper plastic air vents though, which feel a bit cheap and nasty compared to the machined metal vents in a Mercedes S-Class.

Four trim levels are offered, and it’s safe to say none will leave you feeling short-changed. The A7 Sportback represents the cutting edge of Audi technology, so features like 19-inch alloy wheels, LED headlights and leather upholstery are all standard for the Sport version. Those seats are also heated and electrically adjustable, and other comfort-boosting items include climate control, cruise control and keyless entry. 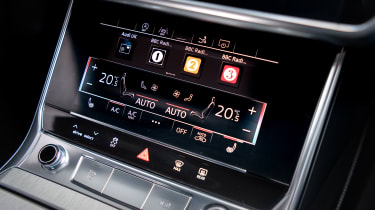 The S line version gets 20-inch wheels and sport suspension, with beam-shifting Matrix LED headlights and scrolling indicators. There’s also a more aggressive look outside and in, set off by sports front seats trimmed in leather and Alcantara and a perforated leather steering wheel. Black Edition adds unique alloy wheels with a 'matt titanium' finish, exterior trim finished in black paint and a flat-bottomed steering wheel.

More reviews for A7 hatchback

The A7's interior is built around the brand's latest MMI touch response infotainment system. Like in a Range Rover Velar, it's split into two screens. The upper 10.1-inch screen mostly displays maps and media, while the 8.6-inch lower screen takes care of climate control and vehicle settings, and is angled back to sit behind a flat gear selector that acts as wrist rest for added comfort. Continuing the digital theme, the latest version of Audi’s 12.3-inch virtual cockpit acts as a user-configurable instrument cluster.

Interacting with the screens feels quite different to doing so in any other car – except the A8 and, to a lesser extent, the latest Audi A6. It doesn't respond to feather-light touches like some systems do: you have to use a little pressure as if you would a physical button. It then responds, with a distinct click of haptic feedback. It might take a little getting used to, but does remove the hazard of accidental button presses. However, some may still find a rotary control dial – such as that of BMW's iDrive system – easier to use on the move.

Elsewhere, there are too many features to list, but highlights include traffic and hazard information that’s now shared between Audi’s as they drive, and a grand total of 39 driver assistance systems that are available to make driving easier and safer. These are split into three packages, with one designed to take care of parking (even as you stand outside the car), a City Assist pack for urban driving and a Tour Assist pack for long-distance driving.