Every Audi A7 Sportback is smooth and powerful, but it’s the diesel that steals the show

It might not be a sports car, but the A7 is one of Audi’s flagship models, and it’s also designed to cruise at high speeds on the German Autobahn. It’s perhaps no surprise then, that even the entry-level diesel can top 152mph, while the 3.0-litre V6 engines and plug-in hybrid boast top speeds limited to 155mph.

Audi’s quattro four-wheel drive system is fitted as standard with six-cylinder models, while the A7 is available with four different suspension setups. There are two conventional chassis - comfort and the 10mm lower sport suspension - along with adjustable suspension and self-levelling adaptive air suspension. All-wheel steering is also available, subtly turning the rear wheels in the opposite direction to the front wheels below 37mph to make sharper turns possible. At higher speeds, all four wheels turn in the same direction to improve high-speed maneuvering. 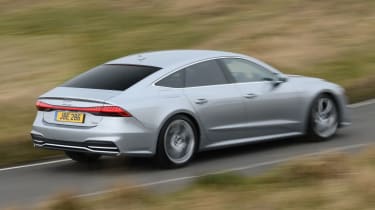 With air suspension set to its sportiest mode, the A7 disguises its size remarkably well, feeling agile and reassuring. The steering is sharper and with quattro fitted, it’s very unlikely you’ll feel the tyres lose their grip on the tarmac. We wouldn’t go quite as far as saying the A7 is as fun to drive as the Porsche Panamera, but it’s closer than before.

To appeal to business drivers, the A7 Sportback is available with a four-cylinder 40 TDI diesel engine, but despite being smaller than the class norm, this 2.0-litre engine still has 201bhp and almost as much torque as the entry-level 3.0-litre. It can get the car from 0-62mph in 8.3 seconds, and because it doesn't really need it, it's also the only version offered without quattro – although you can still add four-wheel drive as an option. Unlike the bigger engines, it comes with a seven-speed S tronic dual-clutch automatic gearbox.

More reviews for A7 hatchback

With 282bhp and a deep reserve of torque, the 3.0-litre A7 50 TDI feels very well suited to the Audi’s relaxed nature. It easily overcomes the A7's 1,880kg weight, too, effortlessly accelerating from 0-62mph in 5.7 seconds. It's as smooth as you'd expect a six-cylinder engine to be, but is a little let down by its eight-speed automatic gearbox. It's a relatively old-fashioned 'torque converter' design that's rather hesitant to respond compared to newer dual-clutch gearboxes of rivals and even the cheaper 40 TDI. A detuned 45 TDI version of the 3.0-litre is also available, with 228bhp and a 6.5-second 0-62mph time. However, considering it has the same running costs as the 50 TDI, the only real advantage is its lower purchase price.

The starter-generator system at the heart of Audi's mild-hybrid technology is quite unobtrusive in operation. A gentle haptic nudge on the accelerator says you can release the pedal and coast in near-silence, and it all feels reassuringly natural. 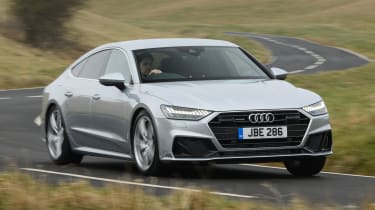 As with the diesel range, a smaller-than-expected 2.0-litre kicks things off, and its 0-62mph-time of 6.2 seconds is less than a second slower than the petrol V6. It has 242bhp, four-wheel drive and an S tronic double-clutch automatic gearbox.

The A7 55 TFSI uses a 3.0-litre V6. It boasts 335bhp, but has less low-down pulling power than the equivalent diesel. The automatic gearbox can sometimes be felt hunting for gears, and this makes it hard work to extract the best performance from the engine. It’s no slouch when driven flat-out though, getting from 0-62mph in just 5.3 seconds. It comes with four-wheel drive as standard, programmed to send most power to the front wheels in normal driving, but send pulling power to the rear wheels if needed.

Look closely at the A7's tail, and if you spot a 55 TFSIe badge, the powertrain is very different to the 55 TFSI version listed above. Instead of a V6 there's a 2.0-litre turbocharged petrol under the bonnet with 248bhp, but it still gets a 55 badge thanks to an electric motor bringing its total output up to 362bhp.

The power on offer helps the car get from 0-62mph in an impressive 5.6 seconds, but like a few other potent plug-in hybrids with four-cylinder engines we've driven, it doesn't always feel as quick as its on-paper stats suggest. There isn't the easily accessible shove of the six-cylinder diesel versions, and while far from unruly, its four-cylinder soundtrack is better suited to a hot hatchback than a car costing around £80,000. The 55 TFSIe is at its best in EV mode, when the sheer refinement of the electric motor makes the A7 feel refined and special.