“The Audi A7 has the appearance of a low-slung coupe, but look more closely and it’s a spacious five-door executive car”&nbsp;

The Audi A7 Sportback is a five-door hatchback that’s the same size as executive saloons like the BMW 5 Series, Audi A6 and Mercedes E-Class, but which looks like a big coupe. It created an all-new model niche when it was launched, but rivals including the BMW 6 Series Gran Coupe, BMW 6 Series GT, Mercedes CLS and Porsche Panamera and have since rushed in to swell its ranks. In response, there’s an all-new Audi A7 set for launch in early 2018.

The interior of the current A7 is still impressive, full of high-end materials, precisely fitted and securely anchored. To keep it feeling fresh, in 2015 it gained some welcome technology upgrades. It’s a stylish interior, but it’s also practical thanks to a wide tailgate that opens onto a large boot, which can be extended courtesy of folding rear seats.

The A7 Sportback is several cars in one, but with the exception of the high-performance petrol-powered S7 and RS7 versions, its engine range is focused squarely on diesel. All are 3.0 litres in size, but there’s a choice of power outputs: 215, 268 or 316bhp. There are no manual versions; all come with a smooth automatic gearbox, a requirement in this class. 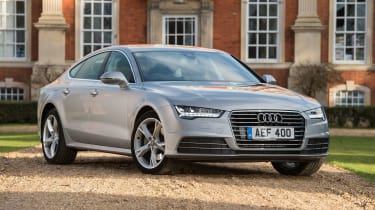 If you’re keen to keep running costs down, the 215bhp engine in the entry-level A7 Ultra with front-wheel drive is the one to choose. In A7s fitted with 19-inch alloy wheels, it can return up to 60.1mpg and emits 122g/km of CO2 (equivalent to a 26% Benefit-in-Kind tax rate for business users).

At the other end of the diesel economy spectrum is the 316bhp A7 with Audi’s quattro four-wheel-drive system. It returns 44.8mpg, but can do 0-62mph in 5.2 seconds, which is extremely quick for a diesel. It’s not much slower than the petrol-powered S7, which takes 4.6 seconds. However, if speed is your primary focus, you should consider the even quicker RS7 Performance. It can do the same sprint in just 3.7 seconds. However, like the S7, it returns just 29.7mpg – at least officially. 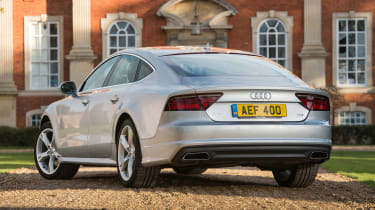 The A7 is available in three trim levels, starting with SE Executive and rising through mid-range S line, with the Black Edition topping off the range. All are well equipped, coming with leather seats, four-zone air-conditioning, cruise control, a power-operated tailgate, sat nav and keyless entry. The S line model costs about £3,000 more than the standard car, with the Black Edition adding a further £2,000 on top of this.

We recommend the 215bhp diesel Ultra model in SE Executive trim. This will have more than enough power for most, yet promises excellent economy. The higher trim levels predominantly focus on (admittedly appealing) aesthetic upgrades, but seem expensive. Specifying a parking camera is advised, though, as the A7’s sleek lines come at the cost of limited rear visibility.

On the road, the A7 has confidence-inspiring grip and does a reasonably good job of insulating you from potholes and poor road surfaces – although this is less true with S line and Black Edition cars, which have lower, firmer suspension and larger wheels, which you can fortunately omit at no cost when ordering. The A7 isn’t the last word in driver involvement, but it’s smooth and quiet, thanks in part to Audi’s ‘acoustic windscreen’, which has been designed to minimise wind noise.

Occupants are treated to a well designed and luxurious interior, even if it’s not quite as modern as newer models in Audi’s range like the TT. The rear seats will take three passengers and offer plenty of legroom, although taller passengers will find headroom tight – another compromise brought about by the A7’s coupe-like looks. The middle rear seat is tight and not a comfortable prospect on long journeys.

Being based on the A6 saloon means the A7 should have tried-and-tested mechanicals. The A7 didn’t feature in our 2017 Driver Power owner satisfaction survey, but the A6 came a respectable 34th out of the top 75 models. Safety is unlikely to be a worry, though: while the A7 didn’t go through its own individual assessment, the A6 scored the full five stars in its Euro NCAP tests.