Given the Audi A7’s size, fuel economy is very good. The Ultra model is designed to be as efficient as possible and it manages over 60mpg. Insurance is cheaper than it’ll be for rivals, but Audi’s warranty could be better.

Audi doesn’t offer its more efficient 2.0-litre TDI diesel engine in the A7, so your best bet is the two-wheel-drive Audi A7 Ultra. It uses an economical 215bhp 3.0-litre TDI diesel, which Audi says will return up to 60.1mpg and emit just 122 grams of CO2 per kilometre. It's our pick of the range, with a BiK band of just 26%. The BiTDI twin-turbo diesel engine, meanwhile, is capable of up to 45.6mpg. Do note that in order to meet strict Euro 6 emissions targets, the TDI engines use a fluid called AdBlue, which helps remove harmful exhaust pollutants. Topping up with AdBlue should be taken care of during the A7’s services, but high-mileage drivers may need to replenish their AdBlue tank between services. 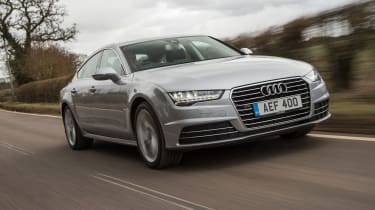 The fast S7 gets a powerful 444bhp twin-turbo V8, but includes a clever cylinder-deactivation system that keeps fuel economy at 29.7mpg. CO2 emissions of 220g/km means the top BiK band of 37% applies to this model. The fiery Audi RS7 is faster still, with either 552bhp in standard form or 597bhp in Performance guise – but with very little penalty in terms of official economy figures.

After the first year's CO2-based road tax (generally included in the on-the-road price), all Audi A7 Sportbacks cost £140 a year to tax. With a list price (including options) of more than £40,000, they’re liable for an additional surcharge of £310 a year in years two to six, bringing the annual bill to £450 during that period.

The A7’s insurance groups range from 38 for the economical Ultra to 44 for the 268bhp diesel model, group 45 with 316bhp and group 48 for the Audi S7 Sportback. In comparison, the lowest group for the Mercedes CLS-Class is 36, so overall the A7 should be similar to insure. Every version of the BMW 6 Series Gran Coupe sits in group 50 – the highest on the sliding scale of insurance.

Audi provides a three-year/60,000-mile warranty on every new car it sells. Given that other car companies are now offering five or even seven-year cover, Audi is starting to look a little stingy. Even the BMW 6 Series Gran Coupe has a three-year/unlimited-mileage package.

Audi offers fixed servicing costs. An interim service costs around £200, while a major one will set you back nearer £400. Audi also publishes some fixed prices for specific repairs: a set of front brake pads will cost £170, while a brake fluid change is £60, for example.